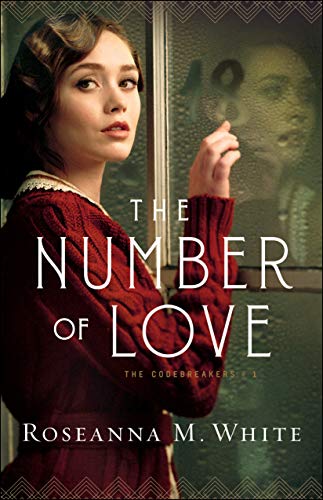 Three years into the Great War, England’s greatest asset is their intelligence network–field agents risking their lives to gather information, and codebreakers able to crack every German telegram. Margot De Wilde thrives in the environment of the secretive Room 40, where she spends her days deciphering intercepted messages. But when her world is turned upside down by an unexpected loss, for the first time in her life numbers aren’t enough.

Drake Elton returns wounded from the field, followed by an enemy who just won’t give up. He’s smitten quickly by the intelligent Margot, but how can he convince a girl who lives entirely in her mind that sometimes life’s answers lie in the heart?

Amid biological warfare, encrypted letters, and a German spy who wants to destroy not just them but others they love, Margot and Drake will have to work together to save themselves from the very secrets that brought them together.

I love Roseanna M. White’s writing. I think she is especially talented at writing romance, so of course I had to read this one! My thoughts:

Margot. Margot almost stole the show in A Song Unheard. I was so excited that she got her own book! What I liked about Margot was this: she stayed the same. The same girl who was brilliant and a bit odd in the previous novel is the same girl in this book. She’s got her own mind, her own plans, and that makes for a very fascinating character when you know her life is about to be shaken up. She’s not perfect, but she’s completely intriguing.

The courtship. Obviously with such a forceful personality, you need a different kind of romance. The way Drake chooses to pursue Margot was quite lovely. It was quirky and fun, and very perceptive.

Friendship. I really enjoyed Margot’s friendship with Dot. The two girls each kind of have their own social failings, but they manage to balance each other out in all the ways that matter. Watching two socially awkward people navigate a friendship was fascinating.

History. My knowledge of WWI is very limited. Kudos to White for tackling a somewhat untouched field in fiction. It’s quite clear White had done her research and you learn a lot about the spy tactics of the time.

Spiritually, the novel deals with truly knowing God, the importance of prayer, and faith vs feeling. I liked the way Margot knew God, it was different and just pinpointed how a person’s relationship with God is so often, very unique.

Another small quibble…several times Margot puts down other women because they think and act differently than her. It was her greatest sign of immaturity. And while she does get called on it, I’m not sure she ever truly understands that just because a girl likes fashion and makeup (or whatever) doesn’t make her any less valuable as a human being.

The mystery. I’m sorry, but it failed to hold my attention. This was one book where I was like forget the plot, let’s jump to character development. If there were ever a test on the mystery of this book, I would fail.

Overall, a good book. It being White’s book, I think my expectations were higher??? But still very good.

**I received a copy from BethanyHouse through Netgalley. My opinion was not affected in anyway.**