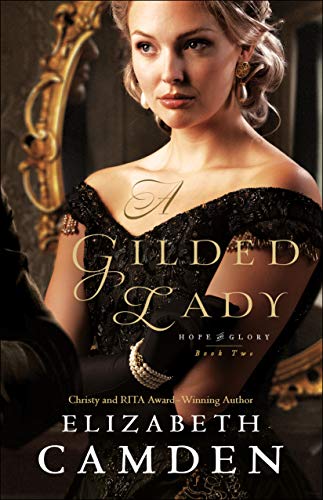 Caroline Delacroix is at the pinnacle of Washington high society in her role as secretary to the first lady of the United States. But beneath the faade of her beauty, glamorous wardrobe, and dazzling personality, she’s hiding a terrible secret. If she cannot untangle a web of foreign espionage, her brother will face execution for treason.

Nathaniel Trask is the newly appointed head of the president’s Secret Service team. He is immediately suspicious of Caroline despite his overwhelming attraction to her quick wit and undeniable charm. Desperate to keep the president protected, Nathaniel must battle to keep his focus fully on his job as the threat to the president rises.

Amid the glamorous pageantry of Gilded Age Washington, DC, Caroline and Nathaniel will face adventure, danger, and heartbreak in a race against time that will span the continent and the depth of human emotion.

I am a fan of Elizabeth Camden even when I don’t love all over her books. And it’s because I know that her books are never alike, her heroines are always whip-smart, her  heroes intriguing, and I’m going to learn something new about American history I didn’t know before. This book is no different:

Caroline. As I’ve said before, heroines are dicey. Most likely because I’m a woman and women are hard on other women (unfortunate, but true). That said, Caroline was a lovely heroine. I wasn’t too impressed with her in the first book of this series. She came off as a bit flighty there. But in this one, who she was made sense. She’s smart, but she’s smart about fashion and protocol, and she wields both as weapons when need be. As this book continues where the last one left off, she’s on a mission to help her brother and she lets nothing get in the way–and yet still manages not to be overtly deceptive or mean.  She’s fun and clever and loyal and smart. I found her to be a completely relatable heroine (almost especially when it came to Annabelle). And I thoroughly enjoyed being in her head.

Nathaniel. He’s a rule follower with a slightly tragic past. My heart went out to him the whole book. He’s doing his best to do a job that his own fears are complicating. He’s a well written hero; introvert to Caroline’s extrovert, black and white to Caroline’s grey. Together, they were fascinating on the page. And I will always be a fan of couples that can work together instead of against each other.

History. I will admit that I knew very little about President McKinley prior to reading this book and I had to stop and look him up myself. I also didn’t know how the White House functioned back then (I don’t know how it functions now), but I learned about both McKinley and the White House in such a way that I knew the author had done her research and at the very least, sparked me to do my own.

Luke. The mystery surrounding Caroline’s brother was such that I found myself completely invested. It’s introduced in the first novel, but in this second one, because of how close Caroline and Luke are, you get an added layer of anxiety. I kind of guessed what was going on, but that didn’t make unraveling the story any less interesting.

Spiritually, the characters pray and learn to trust God in difficult times. I actually found it to be a bit heavier on the things of God than some of Ms. Camden’s previous novels–which I liked.

It’s not that I didn’t like it, but the pacing didn’t quite match the timeline presented. I was actually a bit surprised at the end to find out so much time had passed between Nathaniel’s hiring on at the White House and the end of the novel. Honestly, I thought it all happened in a matter of months, but it was more like a couple of years.

** I received this book from BethanyHouse via Netgalley. My opinion was not affected in anyway.**