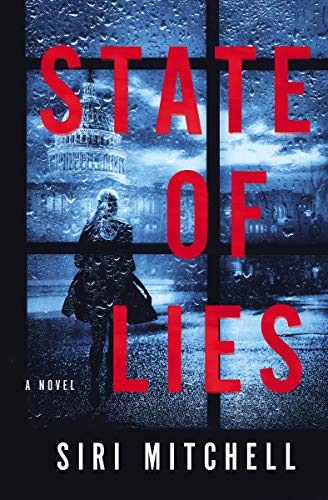 The secrets of those closest to us can be the most dangerous of all.

Months after her husband, Sean, is killed by a hit-and-run driver, physicist Georgie Brennan discovers he lied to her about where he had been going that day. A cryptic notebook, a missing computer, and strange noises under her house soon have her questioning everything she thought she knew.

With her job hanging by a thread, her son struggling to cope with his father’s death, and her four-star general father up for confirmation as the next secretary of defense, Georgie quickly finds herself tangled in a web of political intrigue that has no clear agenda and dozens of likely villains.

Only one thing is clear: someone wants her dead too. And the more she digs for the truth, the fewer people she can trust.

Maybe not even herself.

This was a highly entertaining book. I had problems with it (see below), but for someone who is in the midst of a serious book slump, I finished it, and I must give it props. I am a huge fan of Siri Mitchell’s contemporary novels. My thoughts:

Georgie. Mitchell writes fairly unique heroines. They’re always a bit odd (usually serious introverts) and that’s why I like them. Georgie is smart, straight forward, and very focused. She manages to come off as real from her experiences with grief, her day to day actions, and raising her son. I like that Georgie was not one of those silly heroines who pushes forward ahead without thought or care of the danger she might put herself or her family in. She’s very conscious of the choices that she makes and how it might affect her.

The mystery. There were so many twists and turns with this one. I thoroughly enjoyed it. I never knew from one second to the next what was going to happen. Kudos to the author for the amount of research she must have put in. I never once felt like she didn’t know what she was talking about (and there are some seriously heavy topics).

The romance. I was hesitant to pick this one up only because I wanted a cute romance too and well the premise doesn’t exactly lend itself to that. However, you get a lot of meet-cute moments between Georgie and her deceased husband, and a fairly interesting portrayal of marriage. Let’s just say my romance heart was satisfied.

Spiritually, I’ll be honest, not sure why this is considered Christian fiction per se. I believe the characters mention praying once…it was ‘clean’ though.

I had a couple of problems with this book, the first being that with all the twists and turns, the ending was still too big of a surprise. It would have worked better if there had been a few more breadcrumbs leading up to the conclusion. I was fine with the ‘bad guy’, I just had difficulty buying the way everything went down.

While investigating, Georgie begins to suspect that someone who is close to her may have done wrong, I found it very strange that never once did she think they were innocent, or possibly setup. She was so driven on the truth, that her relationship didn’t come into play at all. Like not at all. Let me just say that I liked that she was focused on the truth, I just didn’t understand why none of it affected her emotionally.

Georgie is not alone in trying to solve this mystery. I did, however, find it odd that her partner didn’t seem as invested in solving the mystery as much as she was when they had the most to lose. Georgie was all in. I didn’t get the same vibe from her partner.

Lastly, the details did get a bit overwhelming. Not going to lie, I skimmed many paragraphs.

Overall, while problematic, highly entertaining and I would still read the next Siri Mitchell book.