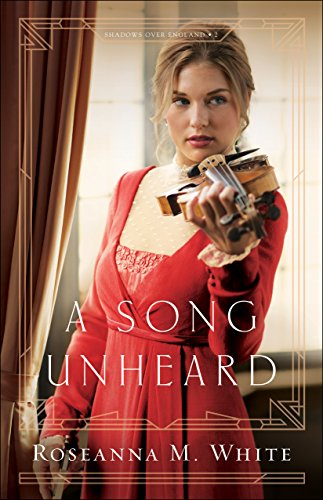 Willa Forsythe is both a violin prodigy and top-notch thief, which makes her the perfect choice for a crucial task at the outset of World War I–to steal a cypher from a famous violinist currently in Wales.

Lukas De Wilde has enjoyed the life of fame he’s won–until now, when being recognized nearly gets him killed. Everyone wants the key to his father’s work as a cryptologist. And Lukas fears that his mother and sister, who have vanished in the wake of the German invasion of Belgium, will pay the price. The only light he finds is meeting the intriguing Willa Forsythe.

But danger presses in from every side, and Willa knows what Lukas doesn’t–that she must betray him and find that cypher, or her own family will pay the price as surely as his has.

Roseanna M. White is one of my favorite authors. Only she can write a book with deception as part of the blurb and still have me read it. She has taught me trust her. My thoughts:

There are actually two storylines in this book. Generally speaking I do not like two storylines, but the second story was so fascinating that I enjoyed every page of it and found myself thoroughly engrossed.

Obviously, there’s deception here, but once again, White handles it so beautifully!

Romantically, I love how Willa and Lukas come together. It feels very organic even though they are such different people.

Historically, you learn so much. It’s a different aspect of WWI that I didn’t know much about and White is able to teach me without making me feel like I was learning.

Spiritually, the novel deals with trust and what it looks like to be a new creature in Christ.

Pretty much loved every word!

Overall, loved this book! If you haven’t read it yet, what are you waiting for? 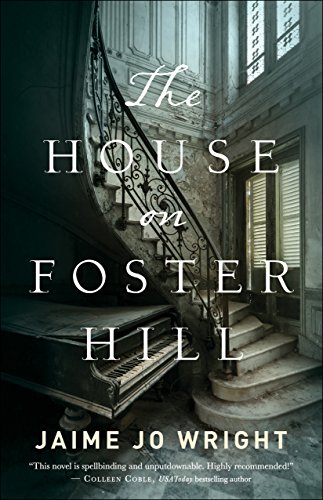 Kaine Prescott is no stranger to death. When her husband died two years ago, her pleas for further investigation into his suspicious death fell on deaf ears. In desperate need of a fresh start, Kaine purchases an old house sight unseen in her grandfather’s Wisconsin hometown. But one look at the eerie, abandoned house immediately leaves her questioning her rash decision. And when the house’s dark history comes back with a vengeance, Kaine is forced to face the terrifying realization she has nowhere left to hide.

A century earlier, the house on Foster Hill holds nothing but painful memories for Ivy Thorpe. When an unidentified woman is found dead on the property, Ivy is compelled to discover her identity. Ivy’s search leads her into dangerous waters and, even as she works together with a man from her past, can she unravel the mystery before any other lives–including her own–are lost?

I requested this book because I love gothic novels. I have read tons and tons of them (Rebecca by Du Maurier being of course the standard). I had never heard of a Christian gothic novel and thought this could be fun. My thoughts:

The author does hit the gothic notes. I was worried the book wouldn’t. Never fear. You have the creepy house that’s a character unto itself. You have the narrators whose mindset you can’t quite trust. You have the strange town and townspeople. And then there are all the gothic effects: dark and stormy nights, unseen danger in the shadows, centuries old mysteries.

Two stories. I’m not always a fan of two stories, but I thought it worked nicely here (even though this is not a typical gothic feature). You have Ivy’s story which is playing out the old mystery at the same time that Kaine is trying to solve that mystery along with a new one. I thought the balance between both stories was nicely done. I also really liked the tie between what was happening then and what was happening now. It added a touch of modernity to the gothic novel that really worked nicely.

Spiritually, the novel deals with believing and trusting God’s promises even when it is difficult. Faith in God gives you hope.

Gothic novels almost need to start with a light touch of the eerie and crescendo toward the end…otherwise it’s too melodramatic all the time. This book crossed into the line of too melodramatic. Kaine, the main character, arrives at the property already half-scared out of her mind. Everything was scary all the time to the point where almost nothing was. I appreciated the gothic notes, it just got to be a bit ham-fisted (a female character named Kaine?…I guess…).

I also didn’t think the Why questions were answered well. They were answered, but I was so skeptical the entire time I was reading the book. When I finished it I was still like why did this happen or why did that happen.

(Spoiler Warning) Why did the hero after meeting Kaine for five minutes drop everything he was doing and put her first? Why did the hero not have a life? Why did the hero have exactly the skills Kaine needed? Why did Kaine, having PTSD problems, decide to buy a house with a creepy background in the middle of nowhere? Why were people randomly helpful? Why didn’t Kaine leave the creepy house and come back when she was in a better mindset? Why did Ivy and Joel become so invested in this mystery to the point where they put their lives at risk? Because these why questions weren’t answered very well (we were just supposed to accept it), I found myself not the least bit invested in any of the characters. For me the book dragged a bit and I found myself skimming.

Overall, not bad, but it also didn’t quite draw me in. 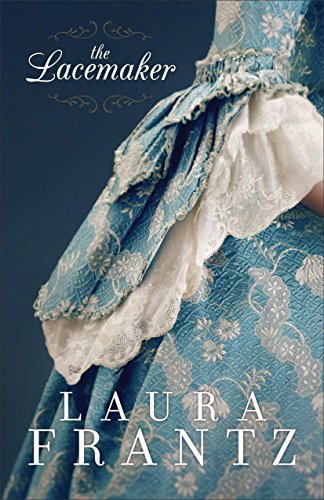 When colonial Williamsburg explodes like a powder keg on the eve of the American Revolution, Lady Elisabeth “Liberty” Lawson is abandoned by her fiancé and suspected of being a spy for the hated British. No one comes to her aid save the Patriot Noble Rynallt, a man with formidable enemies of his own. Liberty is left with a terrible choice. Will the Virginia belle turned lacemaker side with the radical revolutionaries, or stay true to her English roots? And at what cost?

Historical romance favorite Laura Frantz is back with a suspenseful story of love, betrayal, and new beginnings. With her meticulous eye for detail and her knack for creating living, breathing characters, Frantz continues to enchant historical fiction readers who long to feel they are a part of the story.

Laura Frantz is an auto-buy author for me. She is a truly talented historian and storyteller. My thoughts:

History. Frantz always wields the sword of history so well. Every aspect of her book is expertly researched from the beginnings of the American Revolution down to the clothes each person wore. Without feeling like I was in a history class, I learned about lace-making, class issues, the Patriots, the Tories, spying, various historical figures that were real, etc. Not once did it feel overwhelming. Instead, I felt like I had a front row seat in a historical moment in time.

Liberty. Liberty becomes a real person almost right away. You learn her hopes and fears and what makes her tick. She’s a fully developed, complex character. And yet, still one that the reader can trust.

The hero. You can’t find anyone much better than the hero. I did wish he had moved faster in regards to some things, but he was a man of strong character and kindness…a typical Frantz hero.

The romance. The romance develops out of a friendship that can be found amongst the pages. There’s nothing rushed here and nothing complicated.

Spiritually, the main characters pray, seek God, and learn to trust Him in hard times.

This is not necessarily a plot driven novel (though it has a plot!). It’s a character driven novel. That means that sometimes it felt a bit slow.

Overall, a lovely novel as usual by Laura Frantz. If you’ve enjoyed her other novels this one is not to be missed!