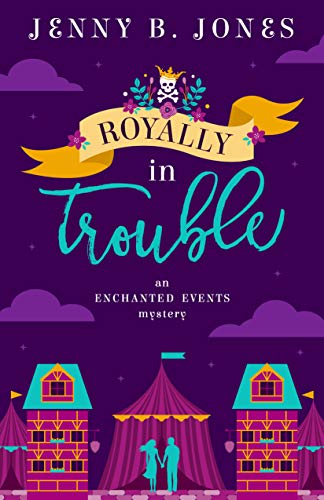 As a former member of a popular girl-band, Paisley Sutton knows what it means to be in the spotlight. So after she takes on an event- planning gig for the new Sugar Creek Renaissance faire, she’s counting on a smooth opening night. But when one of the cast is murdered, Paisley knows her event has gone lethally off-script.

When her old flame Beau is named the prime suspect, Paisley enlists the help of her trigger-happy ex-CIA grandmother and aunt. As she tries to keep the faire alive and fights off her matchmaking family, she uncovers secrets that might just get her killed. Can Paisley shine a light on the killer in time, or will the faire be her final curtain call?

Royally in Trouble is the second book in the lively Enchanted Events cozy mystery series with a dash of romance. If you like engaging characters, small-town intrigue, and laugh-out-loud moments, then you’ll love Jenny B. Jones’ Renaissance romp.

I like Jenny B. Jones because her books are cute, very funny, well-written, and yet usually have a very serious underlying theme. This book is no less. My thoughts:

Paisely. Jones writes some of the best heroines. I can’t think of a single one that she’s created that I didn’t like or relate to on some level. Paisley is no different. I love how she’s a former pop star in a girl group and now faced with a different reality. Paisley is still sort of coming to terms with the fact that her “glory” days are behind her. And in spite of the light heartedness in which she approaches things, it’s also very clear that she wrestles with insecurities.  And yet, as this is book two in the series, you can really see how Paisley has grown. I would have to say that in the first novel, she’s a bit all over the place, but this Paisley–while she still has a lot on her plate–is definitely more in control. She’s running Enchanted Events, trying to solve a murder, dealing with her grandmother’s antics, and trying to navigate the dating world…and doing it in such a way that she’s become a very reliable and fun character.

The mystery. It was actually a very fun mystery in the sense that it was a who-dun-it. There were just so many options as to who the bad guy could be that the novel had you jumping between several characters trying to guess.

The romance. It’s light and yet somehow very pervasive. And very cute. It’s a carryover from the first one, so be sure and read that first!

Secondary characters. Can I admit that I found Sylvia and Frannie a tad bit annoying in the first book? I actually really liked them in the follow-up. They’re very silly, but at the same time, they are there in the serious moments.

Humor. Jones wields humor like a sword. Every now and then, I found myself rolling my eyes as it dipped into silliness, but mostly I found myself laughing.

Spiritually, the characters go to church and reference prayer and God, but this book would probably fall more under the “sweet romance” category.

I pretty much liked everything in this book. It wasn’t one of those books I felt like I had to race through, but it delivered exactly what I expected: light, fluffy, fun…and very much a cozy mystery.

Overall, I thoroughly enjoyed it and I’m very excited for the next one!