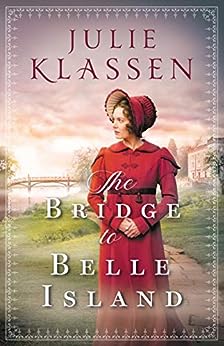 After a humiliating mistake, lawyer Benjamin Booker resolves to never again trust a beautiful woman. When an old friend is killed, the senior partner isn’t satisfied with Bow Street’s efforts and asks Benjamin to investigate. Eager to leave London for a while, Benjamin agrees. Evidence takes him to a remote island on the Thames, a world unto itself, shrouded in mist and mystery. Soon he finds himself falling for the main suspect–a woman who claims not to have left the island in ten years. But should he trust her?

On Belle Island, Isabelle feels safe and leads a productive life, but fear keeps her trapped there. When Mr. Booker arrives with news of her trustee’s murder in London, Isabelle is stunned. She has not left the island, yet she has a recurring dream about the man’s death. Or is it a memory? She had been furious with him, but she never intended . . . this.

When a second person dies and evidence shockingly points to her, Isabelle doesn’t know who to trust: the attractive lawyer or the admirer and friends who assemble on the island, each with grudges against the victim. Can she even trust her own mind? While they search for the truth, secrets come to light and danger comes calling.

There’s something about Julie Klassen’s novels that reminds me of a good episode of a period piece on television. I always enjoy being swept away to 19th century England with one of her books. My thoughts:

The mystery. I really enjoyed the process of the investigation in this novel. It is a classic who-done-it. The murder victim is one of those unlikeable people where everyone and their mama might have killed him. It was so much fun trying out different theories in my mind and just watching everything unravel slowly.

No deception. Benjamin Booker goes to Belle Island to investigate a mystery and low and behold, he manages to solve it without lying or deceiving anyone. There’s a certain honor about Benjamin that shines through in the narrative making him a trustworthy character–even when he feels like he can’t trust himself.

Romance. Because of the honesty of Benjamin Booker, nothing about the romance was off here. And not only his honesty. Isabelle has more than one opportunity to make things complicated and she chooses not to. The main characters were able to build a romance off of trust and friendship and more than that, work together instead of apart, to solve the mystery.

Spiritually, the characters pray and learn to rely on God especially when it comes to anxiety and fears.

In the author’s desire I think, to have a wide net of potential killers, she does create a cast and a history that feels a bit clunky at times.

I think that some readers could find this novel to be a bit slow in parts. The mystery really takes its time and you get to know not only the characters but Belle Island. Really, every Julie Klassen novel I’ve ever read, because they’re heavy on character development, are not as fast-paced as many other novels. Her books take place in a slower time period and thus her characters tend to move at a slower pace. It has to be your cup of tea.

Overall, I thoroughly enjoyed it. I found it to be entertaining and fun and very well written. I read it in a day.

When one Coast Guard officer is found dead and another goes missing, Coast Guard Investigative Service special agent Finn Walker faces his most dangerous crime yet. His only clues are what little evidence remains aboard the dead officer’s boat, and the direction the clues point to will test Finn and the Guard to their limits.

When investigative reporter–and Finn’s boss’s sister–Gabby Rowley arrives, her unrelenting questions complicate an already volatile situation. Now that she’s back, the tug on Finn’s heart is strong, but with the risks she’s taking for her next big story, he fears she might not live through it.

Thrown together by the heinous crime, Finn and Gabby can’t ignore the sparks or judgments flying between them. But will they be able to see past their preconceptions long enough to track down an elusive killer, or will they become his next mark?

Dani Pettrey has written some of my favorite contemporary mysteries so of course I had to pick up her new one. My thoughts:

The use of the Coastguard. Pettrey does her research. I’ve never given much thought to the U.S. Coastguard so it was fascinating to me, as a reader, to learn what all their job entails. I realize this is a novel, but it was very much high action, lots of water, and plenty of nefarious criminals.

Mysteries. There is more than one mystery in this novel and all of them are very layered and complex. They are quite the balls of thread to unravel and you can tell that the author takes her time to craft them. Things also happen very quick. Reading one of Pettrey’s novels is often like watching an episode of NCIS.

Spiritually, the characters pray, realize the importance of accepting God’s grace, and learn to rely on him.

Gabby. I’ve never met a female journalist in person. I have, however, met several of them within the confines of fiction. Based off of novels, here is what I have learned about female journalists, they are: abrasive, self-centered, deceptive, they will put themselves and others in danger if it means getting the story, and they don’t care what relationships they have to sacrifice to make things happen. If you can’t tell, I don’t like female main characters who are journalists. I had high hopes Gabby would be different. She wasn’t. I understand that her main goal in the novel was to recognize her own faults. But I was completely turned off by her behavior almost immediately and was therefore unable to connect.

Too much going on. Dani Pettrey almost always starts her novels in medias res. The reader is just dropped there right in the middle of things and relationships. But this one was too much too fast. I read the first three chapters and wondered if I was reading the first book in a series. I had to stop and check Amazon to see if I had missed something. There was so much action and so little character development. This may have worked if the story stayed purely from Gabby and Finn’s point of view. But it didn’t. There were so many characters and I didn’t know who they were (like I knew their names, but not their personalities). I like to see friendships form and relationships develop. Without any kind of background, I found myself largely not caring whose point of view I was reading  cause it all felt the same and I was definitely skimming towards the end.

Overall, not my favorite book by the author. This may be a personal thing, however. I’m a much more character-driven reader than plot-driven and the little character I got was unfortunately, largely unappealing.

**I received a copy from Bethany House via Netgalley. My opinion was not affected in any way.**