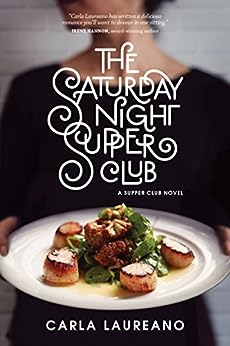 Denver chef Rachel Bishop has accomplished everything she’s dreamed and some things she never dared hope, like winning a James Beard Award and heading up her own fine-dining restaurant. But when a targeted smear campaign causes her to be pushed out of the business by her partners, she vows to do whatever it takes to get her life back . . . even if that means joining forces with the man who inadvertently set the disaster in motion.

Essayist Alex Kanin never imagined his pointed editorial would go viral. Ironically, his attempt to highlight the pitfalls of online criticism has the opposite effect: it revives his own flagging career by destroying that of a perfect stranger. Plagued by guilt-fueled writer’s block, Alex vows to do whatever he can to repair the damage. He just doesn’t expect his interest in the beautiful chef to turn personal.

Alex agrees to help rebuild Rachel’s tarnished image by offering his connections and his home to host an exclusive pop-up dinner party targeted to Denver’s most influential citizens: the Saturday Night Supper Club. As they work together to make the project a success, Rachel begins to realize Alex is not the unfeeling opportunist she once thought he was, and that perhaps there’s life—and love—outside the pressure-cooker of her chosen career. But can she give up her lifelong goals without losing her identity as well?

I’m definitely late to the table with this one, but when I stumbled across it and realized it was about food, chefs, Christian, and contemporary, I had to read it. My thoughts:

The food and chef world. I love food and I love cooking channels, food documentaries, visiting James Beard Award winning restaurants and eating at Michelin starred restaurants and I really felt like Laureano managed to capture that atmosphere so nicely on the pages. There are so many wonderful descriptions of food that’s also contrasted with the long hours and the importance of reputations, etc. I really felt like the author did a good job of bringing all of it to life.

Contemporary romance. I liked Rachel and Alex. They both have an interesting background, and Rachel is career driven while Alex is more people-driven. I will admit that I’m not typically a fan of career-driven protagonists, but Rachel made sense. Even when she’s prickly, she’s relatable. Alex and Rachel had their moments of clashing, and even a slight misunderstanding (mentioned below). However, they always worked through it. Their story doesn’t rest on miscommunication, but instead on how important it is to trust.

Spiritually, both characters discuss their faith and how it has defined them. I will admit that it seemed more a characteristic than a lifestyle, but *shrugs*.

It does follow the traditional journey of having the couple “split” around the 75-80% mark of the book over something that seemed a bit…unneeded.

It’s a bit slower, especially since it’s more character driven than plot driven. I wasn’t necessarily racing to get through this book, but still every moment was enjoyable.

Overall, a very cute story. I’ve already purchased the next one!