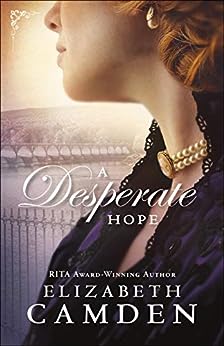 Eloise Drake’s prim demeanor hides the turbulent past she’s finally put behind her–or so she thinks. A mathematical genius, she’s now a successful accountant for the largest engineering project in 1908 New York. But to her dismay, her new position puts her back in the path of the man responsible for her deepest heartbreak.

Alex Duval is the mayor of a town about to be wiped off the map. The state plans to flood the entire valley where his town sits in order to build a new reservoir, and Alex is stunned to discover the woman he once loved on the team charged with the demolition. With his world crumbling around him, Alex devises a risky plan to save his town–but he needs Eloise’s help to succeed.

Alex is determined to win back the woman he thought he’d lost forever, but even their combined ingenuity may not be enough to overcome the odds against them before it’s too late.

I will admit that the little I saw of Eloise Drake in the second book in this series, did not make me want to read anymore about her. But. I really like Elizabeth Camden so I decided to give it a try. So glad I did! My thoughts:

Eloise, ironically enough. While her past (in reference to the second book) is briefly mentioned, most of this book presents a different side to Eloise than I had seen before. As always, Camden has crafted a very smart and a very talented heroine. She definitely has her quirks, but every layer of her personality works. She could have been annoying, instead she comes off as completely relatable. I liked everything about her. And, she’s a perfect foil for Alex.

Alex. Oh, Alex. Kudos to Camden for always managing to craft unique heroes. Alex is flamboyant and charismatic, caring and yet sometimes selfish (more on that later). But the thing I loved about him the most was that he was transparent. Alex didn’t play games or have secrets. He’s very straightforward…which leads me to the romance.

Romance. I liked the romance here because a) the foundation was…interesting (I’m going to leave it at that) and b) neither character played games. They were very honest with each other. It made for a romance that worked and for one that had a solid foundation. It’s always a joy when a couple can work together instead of against each other.

The plot. There’s a pretty neat twist in there. The book went from being about one thing to being about another. Typically, I would find this frustrating, but the twist had a very nice setup that made it all work together in the end.

History. I have never thought about what it would take to move a town or why that would be a thing that would ever happen. I feel like I learned so much and more than that, found myself completely invested in these people and their problems.

Alex had his moments. Camden can write some heroes who drive you crazy…because they aren’t perfect and they’re not trying to be. They do not always apologize for their actions, per se (or in a way I would like). The heroine has to just kind of decide if she’s going to take the bad with the good…which I guess is completely realistic. So, take that with a grain of salt.

Overall, a lot better than I had anticipated. I just really enjoyed this book.

** I received a copy from BethanyHouse through Netgalley. My opinion was not affected in anyway.**