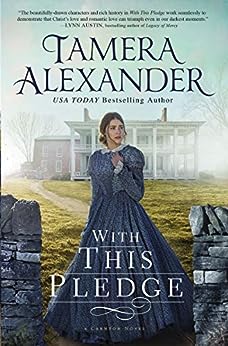 Elizabeth “Lizzie” Clouston’s quietly held principles oppose those of the Southern Cause–but when forty thousand soldiers converge on the fields of Franklin, Tennessee, the war demands an answer. The Carnton home, where she is governess, is converted into a Confederate hospital, and Lizzie is called upon to assist the military doctor with surgeries that determine life or death. Faced with the unimaginable, she must summon fortitude, even as she fears for the life of Towny, her fiancé and lifelong friend.

As a young soldier lies dying in Lizzie’s arms, she vows to relay his final words to his mother, but knows little more than the boy’s first name. That same night, decorated Mississippi sharpshooter Captain Roland Ward Jones extracts a different promise from Lizzie: that she intervene should the surgeon decide to amputate his leg.

Lizzie is nothing if not a woman of her word, earning the soldiers’ respect as she tends to the wounded within Carnton’s walls. None is more admiring than Captain Jones, who doesn’t realize she is pledged to another. But as Lizzie’s heart softens toward the Confederate captain, she discovers his moral ground is at odds with her own. Now torn between love, principles, and pledges made, she struggles to be true to her own heart while standing for what she knows is right–no matter the cost.

Tamera Alexander is easily one of my favorite authors. I love her style of writing, I love the way she crafts her romances, and I love her attention to detail. That said, this book did not work for me. My thoughts:

This book, more than any other of Alexander’s “Plantation” books really explores the complexity of slavery and Christian slaveowners. I thought she did a really good job of showing the layers of slavery and its effects on people personally and often professionally. Without telling you that slavery is wrong, through her characters she’s able to show you (almost too well, but more on that later).

Furthermore, she was really able to take a moment in history (there’s a battle/hospital scene) and really make it come to life with her descriptions. You could really see it and smell it and experience it.

I have read all of Alexander’s books and she continually amazes me by creating characters that are very different from one another and yet none of them are cookie-cutter. Lizzie is a very soft-hearted character (often too soft hearted) and you could really see that in every action and decision that she made.

Usually, Alexander interweaves history with fiction well. In this book, there were too many times where it just didn’t work. I would instantly know that the speech someone was giving was probably real, or the letter being read was genuine, or the description of some scene was used by a person who had actually been present at that time. It took me out of the story each time because it just didn’t flow. Instead it felt like Alexander did a ton of research and did her best to include as much as she could. It was too much.

It got slow. I don’t mind slow. Especially from master-crafts of characters like Alexander. But most of this book takes place in one location and I felt like I was there forever. I definitely was skimming the second half.

The setting. Let me first start by saying I really don’t care for the Plantation settings that Alexander has been on a kick with lately. I say this as someone who loves all things Civil War. I love Civil War fiction, I visit battle sites (and Plantation homes), I watch documentaries…I just plain find it all fascinating. So, it’s not the time period or the era that bothers me. At all. It’s this strange romanticizing of Plantation homes and their owners that I struggle with. She is constantly trying to convince me that they were good, honorable people. I am quite simply not buying. That said, I’ve been able to push past it with her other books, but I think because Alexander tackled the issue of Christians owning slaves, I found it really didn’t work with this book.

I have always found it incredibly difficult to reconcile the idea of godly people being slaveowners but in this book we actually get some stories from the slaves themselves about their owners. And they’re awful. On the one hand I’m presented with the owners of Carnton as examples of all things godly, on the other hand I learn they sent their slaves down south so they wouldn’t run away and the one slave they kept is slightly terrified of them at times. So, yeah. That didn’t work.

Then we have the hero, Roland, who is also a slaveowner but held up to be honorable, kind, thoughtful, pious, and everything that a hero should be. Except his views on slaves, while a product of its times, made him not a romantic figure in my mind. In fact, one of his slaves describes a horrific event that took place either under Roland or under Roland’s father’s authority and so now I’m really not liking the man. I get that Christian people owned slaves, but being cruel to their slaves is just mind-blowing to me. And when he complained about them running away…

By the end of the book I could have cared less about Roland and Carnton and Carnton’s owners. Like go fly a kite.

I get it. People are complex. And it cannot be easy to write a book that is accurate when it comes to the way in which people thought back then. But when these people are held up as a godly standard, and their slaves tiptoe around them, their piety just reads as false to me. And I’m not saying you can’t like problematic people. You absolutely can. Hello, Rhett Butler (talk about charming). And I have read Christian books with slaveowners as heroes that I actually liked (Charles in Lynn Austin’s Candle in the Darkness). But Roland didn’t work and I think it boils down to the fact that you can’t be presented as both kind and cruel. Either the hero stays a little bit cruel to everyone all the time or he transitions from cruel to kind. But he can’t be both. And Roland was both. As a commentary, his personality worked. As a romantic hero, he failed.

Overall, not my favorite. But I’ll still read the next book she writes.

**I received a complimentary copy of this book from Thomas Nelson through NetGalley. Opinions expressed in this review are completely my own.**