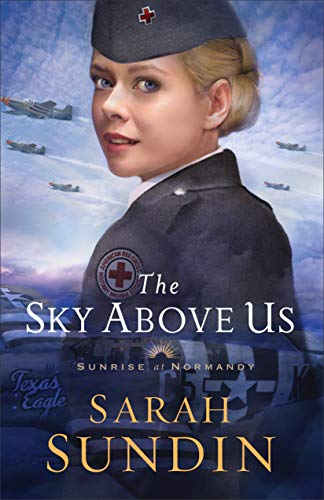 Numbed by grief and harboring shameful secrets, Lt. Adler Paxton ships to England with the US 357th Fighter Group in 1943. Determined to become an ace pilot, Adler battles the German Luftwaffe in treacherous dogfights in the skies over France as the Allies struggle for control of the air before the D-day invasion.

Violet Lindstrom wanted to be a missionary, but for now she serves in the American Red Cross, where she arranges entertainment for the men of the 357th in the Aeroclub on base and sets up programs for local children. Drawn to the mysterious Adler, she enlists his help with her work and urges him to reconnect with his family after a long estrangement.

Despite himself, Adler finds his defenses crumbling when it comes to Violet. But D-day draws near. And secrets can’t stay buried forever.

Bestselling author Sarah Sundin returns readers to the shores of Normandy, this time in the air, as the second Paxton brother prepares to face the past–and the most fearsome battle of his life.

I had other books in my queue to read, but when I saw this one on Netgalley I pushed all of those away. I was super excited about this book because I was completely fascinated by the Paxton storyline from the first book. And more important than all of that, it delivered. My thoughts:

Adler. Actually, I didn’t like him at first because of what I learned about him in the first book, but I knew somehow, someway Sundin would make me like him and she did. To be perfectly honest, he’s arrogant and rather dismissive of those who are not like him. But he undergoes such a transformation throughout the story and becomes a very humble and likeable guy. He’s not without his faults, but that only serves to make his character richer. Adler has quite the past he has to wrestle with (kudos to the author for making such a hero). It would have been easy to dismiss some of it, but I thought Sundin did a lovely job of confronting everything without lessening who Adler was.

Violet. Violet was an interesting foil to Adler. In many ways, the two of them were cut from the same cloth because they both start off as pig-headed and bit prideful. While her transformation is not as dramatic as Adler’s, it still was an important one to follow. I found her personality to be a good match for Adler’s…especially as she had to deal with some of the fallout of his choices.

History. I love, love, love WWII fiction. The last book was about the navy, this book was from the point of view of the air. You really learn a lot about the conditions of pilots in WWII and a lot of situations they had to face. I also learned a lot about the Red Cross. I had never really considered anything that they did besides nursing. Sundin was able to immerse herself (and her readers) into the time period easily without making anyone feel like they were inundated with facts (I will say that sometimes the characters phrases sounded corny, but I’m also not going to say people didn’t talk like that either).

Overall story. I really like how Sundin is telling the Paxton brothers’ story. Not only do you have D-Day from the point of view of air, land, and sea, but you have this family drama that is slowly unraveling with each book. You keep getting a piece of it from each of the men’s narrative and the more you find out the more it becomes slightly horrifying and completely intriguing (idk what that says about me).

Spiritually, I loved the concept of what it looks like to accept God’s forgiveness, forgiving yourself and others, realizing what pride really looks like, and the simple fact that actions have consequences.

I mostly liked Violet. I understood Violet. But sometimes she was frustrating to me. There is a scene where I thought if she had acted one way, she would have saved herself a lot of frustration later. Still, in spite of this, the story was good.

Sundin does follow her typical formula where each main character has one or two flaws that they specifically work on in the story. While it is kind of routine, it doesn’t detract from the story.

Overall, a very good book. I desperately want the third book about Clay. His story is really setting up to be quite the crescendo.

** I received a complimentary copy of this book from Revell through NetGalley. Opinions expressed in this review are completely my own.**