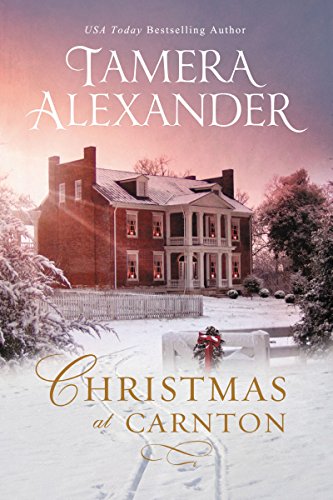 A Christmas story to launch a brand new three-book series . . . The Carnton Novels

Amid war and the fading dream of the Confederacy, a wounded soldier and a destitute widow discover the true meaning of Christmas – and of sacrificial love.
Recently widowed, Aletta Prescott struggles to hold life together for herself and her six-year old son.With the bank threatening to evict, she discovers an advertisement for the Women’s Relief Society auction and applies for a position – only to discover it’s been filled. Then a chance meeting with a wounded soldier offers another opportunity – and friendship. But can Aletta trust this man?
Captain Jake Winston, a revered Confederate sharpshooter, suffered a head wound at the Battle of Chickamauga. When doctors deliver their diagnosis, Jake fears losing not only his greatest skill but his very identity. As he heals, Jake is ordered to assist with a local Women’s Relief Society auction. He respectfully objects.Kowtowing to a bunch of “crinolines” isn’t his idea of soldiering. But orders are orders, and he soon discovers this group of ladies – one, in particular – is far more than he bargained for.
Set against the backdrop and history of the Carnton Plantation in Franklin, Tennessee, Christmas at Carnton is a story of hope renewed and faith restored at Christmas.
Review
Tamera Alexander is an auto-buy author for me because of her lovely detailed romances and her ability to effortlessly interweave history throughout her narrative. My thoughts:
What I liked:
Aletta. Immediately she becomes a character that I feel for. She is a war widow with one child and another on the way and she is having serious money problems. She’s also a woman who has gifts and talents that are not necessarily attributed to women in that day. She’s a hard worker and she makes so many sacrifices all while going through a very difficult time. I very  much liked her.
Jake. Jake is battling losing a piece of his identity and learning a new way of life he didn’t plan for. He is kind and compassionate and willing to admit when he makes mistakes.
Romance. Together Aletta and Jake make sense. At first, I didn’t think they would because there is something strange about a man courting a pregnant woman, but it worked here. In typical Alexander fashion, you see the two of them become friends first before they really fall for each other. At the end of the novel, you have a romance they believe in.
Spiritually, both Aletta and Jake must learn to trust God in difficult, unexpected times.
What I Didn’t Like
I thought the pacing was fine, but I could see how some people might have found this book to be a bit slow at times. This is not a plot driven book. It’s very much character driven.
Also this is a personal preference, but I am not sure why these people in these huge plantation homes are so interesting. For me the least interesting part of the novel is learning about the people at Carnton (nevertheless I shall read this series).
Romantic scale: 8
Overall, I really enjoyed this novella. The best part was that it didn’t actually feel like a novella. Every character was so fully crafted and rounded. It’s a lovely start to a new series and I can’t wait to read more!
* I received a copy from Netgalley. My opinion was not affected in anyway.**