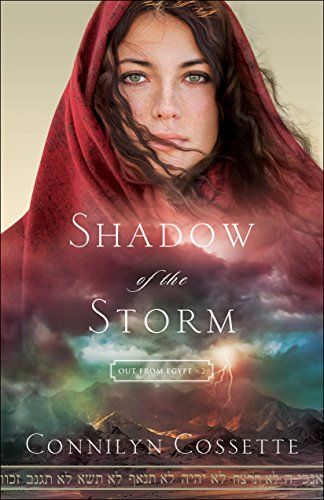 Having escaped Egypt with the other Hebrews during the Exodus, Shira is now living in freedom at the foot of Mt. Sinai, upon which rests the fiery glowing Cloud containing the shekinah glory of God. When the people disobey Yahweh and build a golden idol, the ensuing chaos gives Shira an unexpected opportunity to learn the arts of midwifery. Although her mother wishes for her to continue in the family weaving trade, Shira’s gifts shine brightest when she assists with deliveries. In defiance of her mother, Shira pursues her heart’s calling to become an apprentice midwife.

When a delivery goes horribly wrong, Shira finds herself bound to a man who betrayed her, the caretaker of three young children, and the target of a vengeful woman whose husband was killed by Shira’s people, the Levites. As contention between the Hebrew tribes and the foreigners fans the flames of another dangerous rebellion, Shira will come face-to-face with the heartbreak of her past that she has kept hidden for so long. How can she let go of all that has defined her to accept the love she’s denied herself and embrace who she truly is?

I really enjoyed the first book in this series, and since the second book was about one of my favorite secondary characters I was excited to read it. My thoughts:

One thing that I really like about this series, is that if you’re very familiar with the Bible regarding the Israelites flee from Egypt and time in the desert, you’re very much rewarded. The author has done a fabulous job of having a story that integrates what is happening in the Bible and teaching you about the Israelite culture—all at the same time. I like the lense that we get–through Shira–of what’s happening with the Israelites. You get to see how events not only possibly affected them, but how they lived day by day.

The writing. Honest to goodness, I sat down to read one chapter and pretty much finished the book. Kudos to the author for writing a book that drew me in and kept my attention.

Shira. I really liked her as a character because she’s kind and caring and thoughtful. And there just aren’t that many heroines out there like that. I will say, there were times I wish she had a stronger backbone, but I recognize that that was part of the journey that she was on in this book.

Spiritually, the novel focuses on not allowing fear to hold you back and what love and forgiveness looks like.

The romance. It didn’t work for me for several reasons. One, Shira is very cautious of men and has a good reason to be, however, she gets over her cautiousness very quickly with the hero. It’s not that that’s a bad thing, it’s just that it appeared that one second she was afraid of him and the next she really liked him.  I didn’t know why. Secondly, the relationship started off based on misconceptions and lies. This meant that Shira and her hero fell for each other over long extended looks and sighs. That just didn’t work for me. Several times a character was like, ‘let me tell you something’, and then someone would randomly enter the tent, stopping the conversation. This just doesn’t work for me. If most of your problems in a relationship can be solved with one conversation than their is no problem in your relationship, ergo, it drags upon reading. Lastly, the hero was a bit of a loser. I’m sorry, but it’s true. It’s alright to have a past, but it works better for the hero if he steps up and owns it rather than being all sneaky. I kind of didn’t trust him.

Overall, a very good book. I will admit that I’m not a fan of the way the author wields romance in her books, but I love the way she tells a Biblical fiction story. Definitely worth reading.