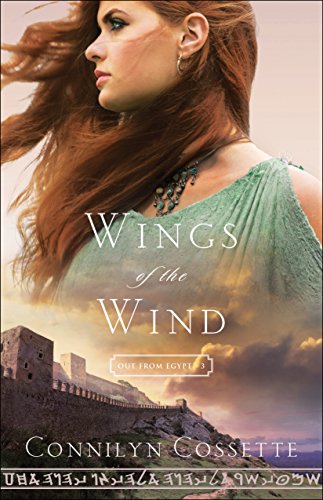 Alanah, a Canaanite, is no stranger to fighting and survival. When her family is killed in battle with the Hebrews, she disguises herself and sneaks onto the battlefield to avenge her family. The one thing she never counted on was surviving.

Tobiah, a Hebrew warrior, is shocked to find an unconscious, wounded woman among the Canaanite casualties. Compelled to bring her to a Hebrew healer back at their camp, he is soon confronted with a truth he can’t ignore: the only way to protect this enemy is to marry her.

Unused to being weak and vulnerable, Alanah submits to the marriage–for now. As she comes to know and respect Tobiah and his people, however, she begins to second-guess her plans of escape. But when her past has painfully unanticipated consequences, the tentative peace she’s found with Tobiah, the Hebrews, and Yahweh is shaken to the core. Can Alanah’s fierce heart and strength withstand the ensuing threats to her life and all she’s come to love?

I’ve been enjoying the Out From Egypt Series…so naturally I had to read the last one in the series. My thoughts:

The premise. Once again Cossette is able to take something from the Bible that was kind of vague and make it real. In this case, she deals with marriage between an Israelite and a captive woman. I thought she showed really well how this would come about as well as the dynamics such a relationship would have on the community.

Tobiah. He’s a sweetheart. I almost immediately connected to him as a character. He has faced some rough times, but he doesn’t let it control him.

Secondary characters. Several characters from the first two books are in this book. It was like catching glimpses of old friends. I found myself still worried about them.

Spiritually, the novel deals with love and forgiveness and what that looks like.

It did feel like Cossette tried to throw in every event the Israelites experienced. I’m not saying she was wrong Biblically speaking, but it felt like a bit too much.

Also, again the romance didn’t quite work for me. I enjoy watching characters fall in love, but in this series it just kind of happens; it’s less about how the couple gets together and more about the ramifications of their relationship and how that relationship would have worked in that day in age.

Overall, this wasn’t my favorite in the series. Nevertheless, this is not a series you want to miss out on!