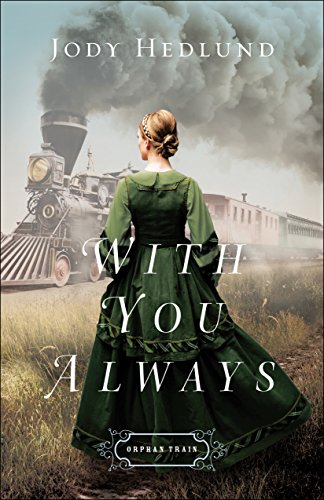 When a financial crisis in 1850s New York leaves three orphaned sisters nearly destitute, the oldest, Elise Neumann, knows she must take action. She’s had experience as a seamstress, and the New York Children’s Aid Society has established a special service: placing out seamstresses and trade girls. Even though Elise doesn’t want to leave her sisters for a job in Illinois, she realizes this may be their last chance.

The son of one of New York City’s wealthiest entrepreneurs, Thornton Quincy faces a dilemma. His father is dying, and in order to decide which of his sons will inherit everything, he is requiring them to do two things in six months: build a sustainable town along the Illinois Central Railroad, and get married. Thornton is tired of standing in his twin brother’s shadow and is determined to win his father’s challenge. He doesn’t plan on meeting a feisty young woman on his way west, though.

I’m a fan of Jody Hedlund. I will admit that I haven’t loved every book that she’s written, but I’ve really loved some books she has written. That said, I was hesitant to read this one. Reading the premise, I thought, here’s another book based on lies and misconceptions that’s going to follow the usual formula. But it doesn’t! I so enjoyed in this book. Here’s why:

Elise. I could appreciate her hard-working ethic and her desire to keep her family together. Elise doesn’t start off in the book with the best outlook on God, but it made sense. She wasn’t overly bitter, she was just incredibly frustrated. Life had dealt her some hard cards and things don’t appear to be getting easier. Nevertheless, she’s really easy to like. She’s extremely caring and extremely loving–even to her own detriment at times. But she was a reliable heroine in the sense that you could trust her to fix her mistakes if she made them.

Thornton. He was a sweetheart. He’s clearly placed in a ridiculous position (what kind of parent does that to a child?) and he does his best to get-her-done. I really liked that Thornton isn’t about keeping secrets and lies, in the beginning, it just sort of happens because he never thought to meet someone like Elise. But, I also like that once he sees where things are going, he comes clean. He changes and he grows into a wonderful hero.

The plot. I will admit, I saw orphan train and thought: yawn. But it’s not about a bunch of little kids. This book is about people surviving in a Depression and working hard and making sacrifices and learning that just because people are different doesn’t mean that they are not worthy of an opinion. While it was predictable in parts, it was thoroughly enjoyable.

The romance. Thornton and Elise are obviously attracted to each other from the first, but they still take time (or rather or forced to take time) to become friends. Their relationship is grounded on trust and conversations and facing hard situations together. Loved it.

Spiritually, the themes of the book are learning that God is trustworthy and I would say, taking a leap of faith.

The only thing I didn’t like was the ending. It literally just ends. The only way this works is if book two picks up right where this one finished because otherwise that was a disappointing end.

Overall, read this book! Start this series! You won’t be disappointed.

**I received a copy from Netgally. My opinion was not affected in anyway.**