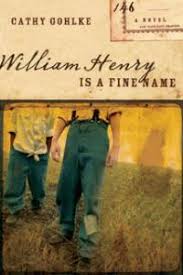 In William Henry is a Fine Name, they told Robert his best friend wasn’t human. Robert’s father assisted the Underground Railroad. His mother adamantly opposed abolition. His best friend was a black boy named William Henry. As a nation neared its boiling point, Robert found himself in his own painful conflict. The one thing he couldn’t do was nothing at all. William Henry is a coming-of-age story about a 12-year-old boy–and an entire country–that comes face to face with the evils of society, even within the walls of the church. In the safety of an uplifting friendship, he discovers the hope of a brighter day.
In I Have Seen Him in the Watchfires, the bonds linking family and the lines separating enemies have become very blurry for 17-year-old Robert. With his father away fighting for the Union, Robert must decide to act alone in order to help his ailing mother, extricate his injured Confederate Uncle, and bring relief to his cousin, Emily. When he unwittingly gets entangled in a Confederate escape plot, Robert must forge his anger and shame into a new determination to save his family. And, perhaps, he must also realize that the saving might not be entirely up to him. Honor and duty to God and country aren’t as clear-cut as he hoped them to be.

I so enjoyed these two books! Of course it was during one of my favorite eras in history (I have so many)! Even my modern, up-to-date, little sister loves these books. Because it is two books, I will do a general review. I preferred the first book to the second, but Robert is such a wonderful character that you can’t read the first book without wanting to read the second one. The first book draws you in immediately and once again, since its from the point of view of a male, friendship is the theme. William Henry is the best friend any kid could have, and let me warn you, bring some tissue paper when you read this book! Spiritually, Robert is raised in a Christian home and knows Jesus young, but when he realizes that there is evil in this world still, it does tests his faith at moments. You should read both books to get the conclusion of his spiritual journey. Good book! Highly Recommended!