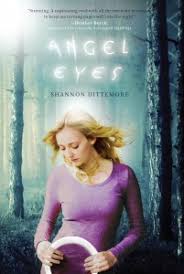 Once you’ve seen, you can’t unsee. Everything changes when you’ve looked at the world through . . . Angel Eyes

Brielle’s a ballerina who went to the city to chase her dreams and found tragedy instead. She’s come home to shabby little Stratus, Oregon, to live with her grief and her guilt . . . and the incredible, numbing cold she can’t seem to shake.
Jake’s the new guy at school. The boy next door with burning hands and an unbelievable gift that targets him for corruption.
Something more than fate has brought them together. An evil bigger than both of them lurks in the shadows nearby, hiding in plain sight. Two angels stand guard, unsure what’s going to happen. And a beauty brighter than either Brielle or Jake has ever seen is calling them to join the battle in a realm where all human choices start.
A realm that only angels and demons-and Brielle-can perceive.
Review
So another angel book here! This one is pretty unique as (as far as I know right now!) neither Jake or Brielle are supernatural or half supernatural beings. They just hang with supernatural beings! I really enjoyed this book although some elements of it were familiar (new hot guy at school who is different, yet into the main character) though a lot of it was new. Brielle has had a hard time and I’m kind of glad that when she met Jake he wasn’t the cure all. Jake is quite simply a keeper. I don’t want to give too much away about this book, but Brielle and Jake have a way to see into the supernatural world and one thing they notice is that fear is something that oozes out of people and becomes their prison. It’s Satan’s signal that you are open for attack. How clever and so true. It definitely had me checking myself out to see if I was walking in fear about anything. So excited for the next one to come out. Highly Recommended!