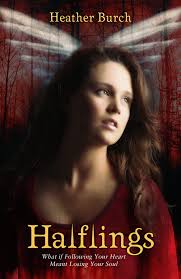 After being inexplicably targeted by an evil intent on harming her at any cost, seventeen-year-old Nikki finds herself under the watchful guardianship of three mysterious young men who call themselves halflings. Sworn to defend her, misfits Mace, Raven, and Vine battle to keep Nikki safe while hiding their deepest secret—and the wings that come with. A growing attraction between Nikki and two of her protectors presents a whole other danger. While she risks a broken heart, Mace and Raven could lose everything, including their souls. As the mysteries behind the boys’ powers, as well as her role in a scientist’s dark plan, unfold, Nikki is faced with choices that will affect the future of an entire race of heavenly beings, as well as the precarious equilibrium of the earthly world.
Review
I liked this book. I thought it was a lot of fun and there is nothing like a supernatural mystery to liven things up. The novel pulled me in from the first page and I was eager to know what happens next.  I’ve read a couple of books where boys are half-angels or fallen angels or something, but I like how these boys have guidance from a real angel. It keeps them and me the reader grounded. Nikki is a pretty bold character, but I like her and I look forward to learning more about her. The book does leave you with probably more questions than answers, but that is typical of a series. The drawback to this novel is that it does play on teen stereotypes: you have the two boys one girl thing going and one boy is typically “good” and the other is typically “bad.” Ms. Burch does give more depth to the boys, but there is stll that feeling that you’ve met these characters before. And again, the two guys one girl story never leaves me completely satisfied in the end, but it’s not over yet so I may be surprised. Spiritually, (I’m not going to address whether half-angels exist) Nikki has a choice to make in regards to faith, but I kind of like that Mace and Raven have to decide between their souls or their heart. Always better to choose God, He will surprise you and it’s always worth it in the end. But in reality the choice is never easy. I love that Will gets downloads from heaven, its always odd to read books about angels who never talk to God. Fun book, cool people (who wouldn’t want to date a guy with a few supernatural gifts), interesting mystery. Recommended!
Anybody else read books with angels (or some variation) as a main character? Got a favorite?