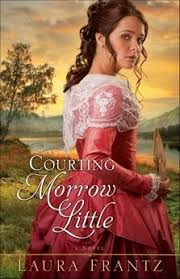 So Courting Morrow Little is not your typical American Revolutionary War novel. There are no mentions of Washington and no Valley Forge. However, this novel still takes place during that time period, but in Kentucky. It’s further west, but you still have the worry and the fear, the prayer and petitions, the sadness and the joy that encompasses any war novel. The novel is about Morrow Little, who survived an Indian attack when she was a girl. Her mother and sister were killed and her brother taken. She leaves the Kentucky area for a while, but comes back to be with her father. Her father has learned to forgive any and all Indians for the attack on his family and welcomes two of them into his home on a regular basis, much to Morrow’s chagrin. I don’t want to go any further, but let me just say that this is one of my favorite books of all times. It’s romantic, it’s heart-wrenching, a little mysterious, and completely captivating. There are lines from the book that still echo in my head.  Spiritually, Red Shirt, an Indian in the story comes to know Christ in the middle of the novel. I love how he just believes what the Word of God says. He’s so new in the faith that he doesn’t try to add anything new or take anything away from the scriptures. He just believes God, like I hope to do daily. Looking forward to the next novel by Ms. Frantz!

Does anyone know of some great American Revolutionary novels? I know I mentioned Siri Mitchell’s The Messenger in an earlier post. Know anymore?