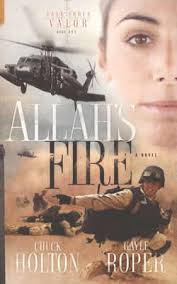 I really enjoyed this book because the action makes sense. In this novel, you have Liz Fairchild who is an American reporter in Beirut and Sergeant John Cooper in Special Forces. They dated in the states until one day he essentially disappeared (he had a mission to go to). Liz is in Beirut when she sees him, but has no idea he is undercover. Then Liz goes to help a family and once again gets thrown right in the Special Forces way. I appreciated this book because Liz wasn’t one of those annoying reporters who must get the story. She was just trying to enjoy Beirut (at first). John Cooper is your all around American boy and his team is really fun and likeable. Spiritually, you have Liz and the Team who need all kinds of prayer as they run through Beirut and then there’s Liz’s sister who married a nice guy, but a muslim and has to learn to deal with it. Don’t be unequally yoked folks!