Team Hope is a group of men and women who were at some point in the military but now run Search and Rescue. Yet, that doesn’t stop them from getting involved in many international plots. The series is fun, exciting, and romantic. A part of me wishes she had given everyone in the Team their own story, but she choose to highlight three. You can’t go wrong with any of them. Most of the characters already have a relationship with God, but for some it’s more distant than others. They all have to work through their own problems, shames, hurts but eventually they learn to heal. Any favorites? 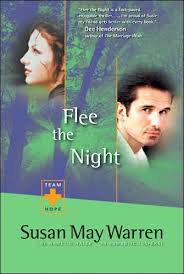