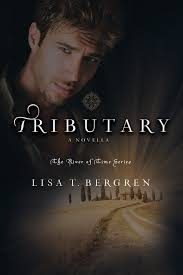 So the River of Time is a fun series. If you read this book, you must, absolutely must start with book one: Waterfall. It’s hard to talk too much about Tributary without giving away things that happen in the other books. To sum the series up though, we’ve got two 21st century girls who, while on an archealogical dig, get transported back in time to 14th century Italy. To speak more generally, about the series, I love that when the girls go back in time they are both modern and respectful of the time that they are transported to. Nothing more aggravating than a modern woman in old times. More, specifically, Tributary still maintains the exciting romance and the wonderful knights (gotta love knights) as in all the rest. The sisters start off the series with a vague notion of God, but by Tributary they are praying and seeking Him and learning to get past the spirit of fear. There’s lots of adventure going on, befitting the times. The only thing I would say is a miss for me, is that nothing seems to get resolved (same conflicts, same people). But maybe that’s how it was back then.