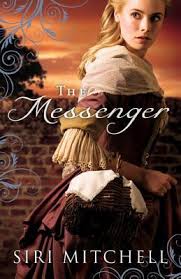 The Messenger is about a woman, Hannah, who is a quaker during the Revolutionary War. This of course means that she, nor her family should take part in the war. Well, her brother runs off and joins the Americans only to be captured by the British. Then enters Jeremiah, a man who has one arm which doesn’t allow him to fight physically, but he still wants to help the Americans. Ms. Mitchell did her research and weaved it into her novel so well I felt like I was there. I think there were only two problems with this book: one I’m not going to mention as it goes to the core plot of the novel, the other is that there was no kiss. A romance novel with no kiss! It makes perfect sense for that era, but it bothered me in this era. Its not a deal-breaker though, so highly recommended!

Spiritually, Hannah has to learn that she doesn’t need to be a quaker to please God and Jeremiah needs to learn that God is still there and hasn’t given up him. He still has a purpose as we all do!

2 thoughts on “Siri Mitchell’s The Messenger”