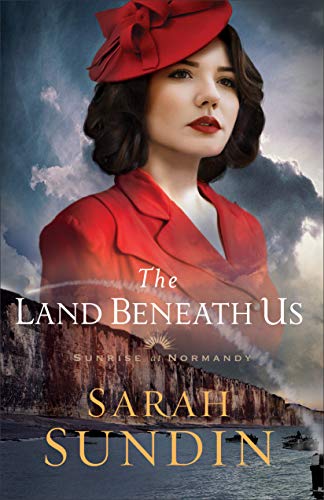 In 1943, Private Clay Paxton trains hard with the US Army Rangers at Camp Forrest, Tennessee, determined to do his best in the upcoming Allied invasion of France. With his future stolen by his brothers’ betrayal, Clay has only one thing to live for–fulfilling the recurring dream of his death.

Leah Jones works as a librarian at Camp Forrest, longing to rise above her orphanage upbringing and belong to the community, even as she uses her spare time to search for her real family–the baby sisters she was separated from so long ago.

After Clay saves Leah’s life from a brutal attack, he saves her virtue with a marriage of convenience. When he ships out to train in England for D-day, their letters bind them together over the distance. But can a love strong enough to overcome death grow between them before Clay’s recurring dream comes true?

This book was definitely one of my most highly anticipated reads of this year. My thoughts:

Clay. I’ve been looking forward to meeting Clay since the first book in this series. I was definitely curious about his mindset considering what we learned about him in the previous books from his brothers. Clay does not disappoint. He’s clearly battling what forgiveness looks like while getting past his own hurts. I love that the author doesn’t shy away from how he would have felt as a person of mixed race. Much of Clay’s storyline takes time to knit together the loose threads between him and his brothers and I thought it was done well.

Leah. Leah’s overall personality was unique. She was not one to let bad circumstances dictate her future. I’m not going to say I always related to her, but because she felt very fleshed out, I did understand where she was coming from. She was a very upbeat, resilient, and a kind heroine.

Marriage of Convenience. I love a romance that starts with a marriage. Clay and Leah have different reasons for getting married, but ultimately they want the best for each other. The fact that they are married to each other for most of the book adds a fun layer.

Spiritually, the novel deals with forgiveness and what that really looks like. Further, it deals with trusting God in difficult times.

The romance. Let me start off by saying that when Clay and Leah were together, it was lovely. I enjoyed seeing them interact. The problem was, it felt like much of their romance happened offscreen. When they were in the same place at the same time, often we, the reader, would learn that they had done this or that, but were not able to see it. Then, Clay goes to war and while we see a few of their letters to each other, again, most of the interesting tidbits seemed to occur in letters we weren’t shown. I understood the romance, I just would have liked to see it played out a bit more.

Leah’s circumstances. Leah and Clay each have something they are dealing with outside of each other. For me personally, the “thing” Leah is dealing with was sort of…boring. I understood her search and her love for her real family, but the issues she had with the community around her failed to draw me in.

Also, I must admit that the war itself didn’t quite draw me in. I love war fiction, but watching Clay go through training was boring (he trained a lot). I found myself skimming those parts. And then, when Clay was at war, there was an element of removal there. He was so focused on a particular goal that mentally, it was almost like he wasn’t at one of the most dangerous battles ever fought. I imagine that being on the ground for D-Day was traumatic, goal-oriented or not, but Clay didn’t seem to be largely affected by the sights and smells going on around him–and that felt really odd to me.

Overall, I will admit to some slight disappointment. I love how much time the author took to resolve the issues presented from the start of the series, but it felt like Clay and Leah’s romance took a bit of a hit because of it. Still, love Sarah Sundin and I’m looking forward to what is coming next!

**I received a copy from Revell via Netgalley. My opinion was not affected in anyway.**