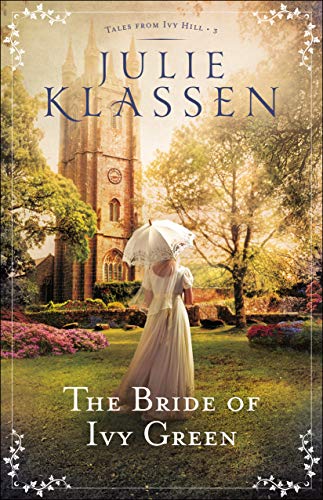 Much has happened in idyllic Ivy Hill in recent months, and while several villagers have found new love and purpose, questions remain–and a few dearly held dreams have yet to be fulfilled.

Jane Bell is torn. Gabriel Locke is back and has made his intentions clear. But Jane is reluctant to give up her inn and destine another man to a childless marriage. Then someone she never expected to see again returns to Ivy Hill. . . .

Mercy Grove has lost her school and is resigned to life as a spinster, especially as the man she admires seems out of reach. Should she uproot herself from Ivy Cottage to become a governess for a former pupil? Her decision will change more lives than her own.

A secretive new dressmaker arrives in the village, but the ladies soon suspect she isn’t who she claims to be. Will they oust the imposter, or help rescue her from a dangerous predicament?

In the meantime, everyone expects Miss Brockwell to marry a titled gentleman, even though her heart is drawn to another. While the people of Ivy Hill anticipate one wedding, an unexpected bride may surprise them all.

I always enjoy Julie Klassen’s novels. They are always filled with complex, layered characters and a historical setting that comes alive. Also, since this is the third book in the series, I was very much looking forward to visiting with my old friends. My thoughts:

Jane’s back! Jane was my favorite character in the series and we saw less of her in the second book (and less of Gabriel). It was good to be with her again. The way the last book ended, I was worried that there would be unnecessary drama between Jane and Gabriel, but everything worked out perfectly. Klassen gives Jane some new problems to deal with, but all of them were interesting and I found myself totally invested in how things would work out.

Mercy is also back! She wormed her way into my heart in the last book and it was great to be in her head again. While I do think her romance was more complicated than it had to be, I enjoyed the journey of seeing where Mercy ends up.

As always, it was a joy to run into the secondary characters who have been throughout the series and to meet some new ones. This was very much a story of what life might have been like in a small English village.

Spiritually, the novel deals a lot with trusting God, especially when things look bad or go from bad to worse.

Because there were several points of views, some characters were more interesting than others and at times, I found myself skimming so I could get back to a character I liked.

Overall, I very much enjoyed this series and read it much faster than anticipated. If this had been a TV show, I would have absolutely loved it.

I received a complimentary copy of this book from BethanyHouse through NetGalley. Opinions expressed in this review are completely my own.