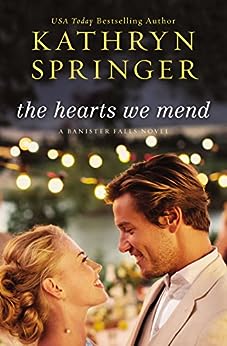 Planning and Post-It notes are the epitome of Evie’s life. But when she meets Jack, her life gets more than a little complicated.

Thirteen years ago, Evie’s firefighterhusband was killed in the line of duty, leaving her to raise their young son, Cody, alone. Now, Cody is marrying the love of his life, and as he packs up his belongings, the house feels as empty as Evie’s heart. But for all her planning and mad organizational skills, Evie could never have anticipated the dramatic shift her life is about to make.

Tattooed, rough-around-the-edges Jack raises quite a few eyebrows in the tight-knit community of Banister Falls. Where Evie’s life is stream-lined, Jack’s approach to living is moment-by-moment. But as Evie gets drawn into Jack’s world—a world that isn’t as safe or predictable as the one she’s worked so hard to create—he challenges her to open her eyes to the problems outside the walls of the church.

Jack doesn’t make Evie feel comfortable, but he definitely makes her feel something. Something she hasn’t felt since Max passed away—or, maybe ever. Because even though Jack isn’t anything like her late husband, he just might be everything she needs.

I randomly stumbled across this book, bought it (cause it was a deal!), read it, and was pleasantly surprised. I will admit that I was a bit hesitant at the age of the heroine since her son is getting married in the novel, but I was won over with the description of Jack. I’m a huge fan of the unusual hero. My thoughts:

Evie. I don’t usually like heroines, but I liked her. I understood her. She’s a planner who is learning how to deal with some big surprises…the main one being that her 18 year old is getting married and going to be a father. On the outside she looks like she has everything together but on the inside life doesn’t feel so great. Watching Evie walk through this season in her life was a joy. She’s kind and compassionate, and even though she may not understand, she tries.

Jack. I love me a good hero and Jack delivers. He’s a man with a past who is doing his best to live right and lead his family to Jesus. In some ways, he’s kind of all over the place, but you still manage to get that sense that he’s someone you can count on. The author does a lovely job of introducing him and making me root for him right away.

The romance. I feel like it’s been so long since I’ve just really enjoyed a Christian contemporary romance novel, but I really liked this one. Evie and Jack are so different and so it’s easy to see why there was hesitation on both sides, but what I loved was that when there was conflict or confusion, they confronted it. They learned who the other was and then worked together.

Spiritually, characters pray and learn to rely on God even when things don’t turn out the way that they think they should.  Also, there’s a lovely theme on showing what love in action really looks like.

I think I pretty much loved this whole book. It was weird that Evie’s kid was 18 and married but Evie thought it was weird too.

I can’t think of the last time that I’ve enjoyed a contemporary Christian novel as much as I enjoyed this one. I didn’t want to put it down!