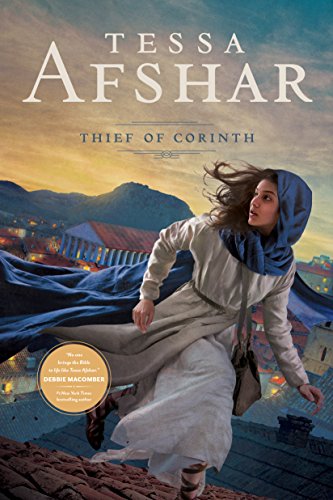 First-century Corinth is a city teeming with commerce and charm. It’s also filled with danger and corruption—the perfect setting for Ariadne’s greatest adventure.

After years spent living with her mother and oppressive grandfather in Athens, Ariadne runs away to her father’s home in Corinth, only to discover the perilous secret that destroyed his marriage: though a Greek of high birth, Galenos is the infamous thief who has been robbing the city’s corrupt of their ill-gotten gains.

Desperate to keep him safe, Ariadne risks her good name, her freedom, and the love of the man she adores to become her father’s apprentice. As her unusual athletic ability leads her into dangerous exploits, Ariadne discovers that she secretly revels in playing with fire. But when the wrong person discovers their secret, Ariadne and her father find their future—and very lives—hanging in the balance.

When they befriend a Jewish rabbi named Paul, they realize that his radical message challenges everything they’ve fought to build, yet offers something neither dared hope for.

Be transported back in time by this gripping tale of adventure, bravery, and redemption, and discover why Debbie Macomber says, “No one brings the Bible to life like Tessa Afshar.”

I always read Tessa Afshar’s books when they come out and I was very excited about this one. My thoughts:

History. Tessa Afshar really is able to bring alive cultures and worlds that I’ve read about in the Bible in such a way as to make them real. I think it’s easy to forget that these were real people with real lives and it’s so fascinating to see it come alive on the pages. I always learn so much.

Secondary characters. Theo, Justus, Dionysius, the Claudias, the rest of Ariadne’s family…all of them are very unique and present a different look into the times and place in which they lived. Not to mention the hero in this story. Afshar writes great heroes! Though this book isn’t necessarily romance focused, it has a very sweet romance that envelopes slowly on the pages.

Spiritually, I thought the way the author incorporated a faith in Jesus really worked seamlessly with the narrative. I particularly liked how the book doesn’t just end with salvation…the characters must learn to walk and live it out!

For me, it felt like I kept waiting for this book to get started. So much of it in the beginning is the laying out of what’s happened and watching Ariadne grow up. I think because the book is titled the Thief of Corinth, I read the book waiting for specific events to happen and actually didn’t get them until much later. For this reason, it felt very slow in the beginning.

Also, strangely enough, I did not connect to Ariadne. I think due to some of the author’s detailed explaining, a distance was created there.

Lastly, my favorite character kept getting the short end of the stick in the book. The author tried to put a positive spin on it, but I just wanted him to really win for once.

Overall, a good book, though not my favorite from the author.