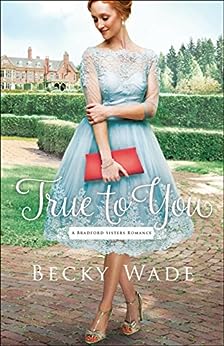 After a devastating heartbreak three years ago, genealogist and historical village owner Nora Bradford has decided that burying her nose in her work and her books is far safer than romance in the here and now.

Unlike Nora, former Navy SEAL and Medal of Honor recipient John Lawson is a modern-day man, usually 100 percent focused on the present. But when he’s diagnosed with an inherited condition, he’s forced to dig into the secrets of his past and his adoption as an infant, enlisting Nora to help him uncover the identity of his birth mother.

The more time they spend together, the more this pair of opposites suspects they just might be a perfect match. However, John’s already dating someone and Nora’s not sure she’s ready to trade her crushes on fictional heroes for the risks of a real relationship. Finding the answers they’re seeking will test the limits of their identity, their faith, and their devotion to one another.

I love Becky Wade books. I really do. Not every Christian romance writer can write contemporary fiction, but Becky Wade can and she does it so well. This book reminded me of all the reasons why I fell in love with her writing. My thoughts:

Nora. There are so many times when I read novels where I love the hero and cannot stand the heroine. Not here. Nora was completely relatable; there was everything from her obsession with a British show, to her relationship with her sisters and family, to her love for her job, to her hopes and fears as a single woman. I liked that she was an older single (late 20s) woman. These women do exist too! I liked that she saw a man who was attractive and really liked him. There were no games played here, which I really appreciate (okay John definitely has a girlfriend at the start of the book, but come on, he wasn’t married yet. I could understand why she still wanted to know him.)She had insecurities, but at the same time they didn’t drive her. She had something in her life (her town and research) that she was passionate about, but it didn’t own her. She wasn’t perfect, but when she made mistakes she fixed them.

John. Come on now, retired Navy Seal? Yes, please. I liked how serious and focused he was. I was able to appreciate his honor and how he treated and cared for those around him. John is facing quite the problem, but he doesn’t let it get him down.

Romance. It was wonderful. Nora is taken with John right away, but him not so much. To see him fall in love with her on the pages was so lovely. They spent time together, they became friends. They argued. They made up. Nothing felt superfluous. Just lovely.

Secondary characters. Nora’s sisters are so interesting. I eagerly await their romance novels!

Spiritually, the novel deals with identity. It doesn’t matter where you came from or what the past looks like, once you become a believer, your identity is in Christ.

Overall, I just loved this book. Loved it!