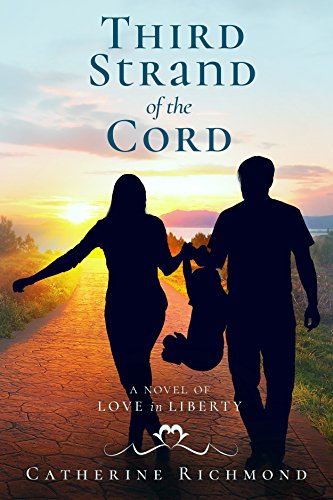 She prayed for a fairy godmother and got a… karate instructor? Hard-working single mom Caroline Jameson wonders why her son is so unruly. Weren’t children with Down syndrome supposed to be cuddly and compliant? Her ex says the boy belongs in an institution. Caroline will do anything to prove him wrong, even sign her son up for karate classes with a know-it-all instructor.
Lee Marivaux is an expert at reading people. He knows his feisty new student will thrive with firm guidance – and he’s right. He pegs the boy’s mother as a clueless socialite who loafs at the country club – and he’s never been so wrong.
It’s a battle of wills and misperceptions – until Caroline’s abusive ex shows up, demanding custody. Can Lee and Caroline join forces to keep the boy safe? And in a town called Liberty, will love give them the freedom to braid themselves into a strong new family?

I have enjoyed several of Catherine Richmond’s books before so I decided to try this one. So glad I did!

Caroline. It’s hard for me to like heroines. Most likely because they are usually the ones holding back the romance for some lame reason or the other. But Caroline was strong and she had a lot on her plate and if she had reasons to hold back, they were good ones. And yet, she wasn’t one to hold back. I liked her!

Lee Marivaux. Somehow I adored him. In real life, he would have driven me mad, but on the pages I adored everything about him. He’s kind and thoughtful and patient and loving, and yet slightly bossy. Totally worth meeting.

The romance. This story has been told before and yet, it felt so new. Caroline and Lee have a bit of a gender role reversal (as far as the romance genre is concerned): she’s educated, he’s not, she fixes cars, he doesn’t understand them; she’s plans for the future, Lee lives in the moment. And at first, I was like what’s the problem, this is so cool. And then I placed myself in Caroline’s shoes and I was like, yeah…I see the problem. Nevertheless, the situation worked for them (and me as a reader).

The presentation of down syndrome. It’s not like I often read books about down syndrome, but when I do, the character who has it is presented as this naturally good ‘other’ and so, basically I knew nothing about this disease prior to opening this book. Now, I feel like I have a handle on what down syndrome is and how it affects families. Richmond presented it in such a way as to make it real. She didn’t sugarcoat things and she somehow managed to make me want to research the condition on my own. I learned much and I’m grateful to her for it.

Spiritually, both characters are Christians (though only one is really serious about his faith). The book shows the characters living out their faith.

Because one person was more spiritually grounded than the other, it felt a bit like missionary dating and I personally believe that people should be on the same page spiritually or close to before getting seriously romantic. However, this is just a pet peeve and not one that affected my enjoyment of the book.

Overall, such a good read. I didn’t want to put it down!

One thought on “Catherine Richmond’s Third Strand of the Cord”