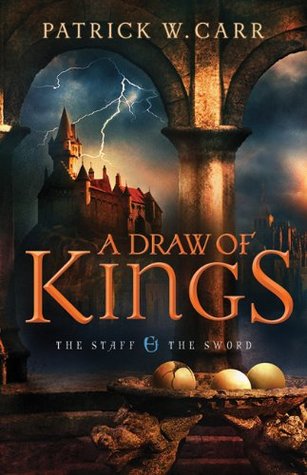 Their journey to Merakh should have made Errol and his companions heroes of the realm. Instead, much is changed on their return. In the wake of the king’s death, Duke Weir is ruling the country–and his intentions are to marry Adora to bring an heir.

With Errol and the others imprisoned and the identity of the rightful heir to the throne still hidden in secrecy, Illustra is on the verge of civil war–and at growing risk from the armies of Merakh and Morgol.

A dangerous mission to free Errol succeeds, but the dangers facing the kingdom are mounting with every passing moment. The barrier has fallen, ferals are swarming toward the land, and their enemies draw near. Will the revelation of Illustra’s next true king come in time or will all be lost?

I cannot express just how thrilled I was when I received this book. Errol is probably one of my favorite characters of all times. Now onto the review:

If you have read the first two novels then you know that the first book is all Errol’s viewpoint, the second is Errol and Martin’s viewpoint, and this last one is Errol, Martin and Adora’s viewpoint. While some may prefer having Errol be the only voice (and to a certain degree I missed that), I still very much enjoyed Martin and Adora’s point of view. I will say that I always felt like Adora was not that important, but getting to know her as a character really brought strength and likeability. Before I wasn’t sure why she was so attached to Errol. Now I know, and I became really invested in their relationship. I would argue that book three is the most romantic of the series.

There is also a number of questions that must be answered in this book and even a new one that is created in the beginning. The solution? Well, I was on the edge of my seat trying to figure it out. This book has adventure, adventure, action, and adventure. At the end of the book, I did guess correctly an answer or two, but there was still at least two or three things that had me completely surprised. I must say, that the whole time I was reading the book, I kept thinking (and I’m sure you will to), now how are they going to make this work.

Was it completely satisfying in the end? Yes and no. Yes it answered all my questions and ended all tightly wrapped up. No because Errol, I don’t want you to be done. I don’t want the adventure to be over. In fact, when I closed this book, I immediately picked up book one again. Errol is just that awesome.

Spiritually, the novel deals with death and what death in Christ (Aurae) looks like and how trusting God means that you can’t trust yourself and the old ways of doing things. The novel really comes full circle with this one and you get the message that I think Mr. Carr has been trying to get across since book one.

Overall, I really enjoyed this book. Just sad that the series is over!

**I received a copy of this book from Netgalley. My opinion was not affected in any way.**