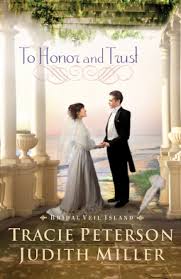 Callie DeBoyer is unsettled as she arrives at Bridal Veil Island with the Bridgeport family. She’s just received a letter from her parents, missionaries in coastal Africa, stating they are in dire need of more personnel. Should Callie give up her governess job and join her parents in their important work? Is God calling her to the mission field, or does she just want to escape the emotional scars of being jilted by her former beau?
When she enrolls young Thomas Bridgeport in golf lessons, Callie meets Wesley Townsend, who urges Callie to take lessons, as well. During their time at the golf course, Callie comes to care for Wesley–until she discovers hidden secrets about his past.
Then expensive jewels go missing from various homes on the island, and suspicion is aimed in Callie’s direction. As the investigation continues, Callie wonders if she should escape it all by going to Africa. After the secrets he kept about his past, will Wesley ever be a man she can honor and trust for the rest of her life?

This was my first book in this series, but I must say that the authors did a fantastic job of placing me in Bridal Veil. By the time I finished the novel, I felt like I knew what it was to vacation there in the early 1900s. My favorite character in the book was Wesley. I thought he was the most developed character in the novel. He was a Christian without having that veneer of perfection and I just plain liked who he was. Callie was kind of a difficult character for me to like. She came across as a bit self-righteous and more controlling than I would have liked. While there was an explanation for her behavior, I’m not sure that it sufficed.  I also felt that the novel lacked romantic tension. Callie and Wesley seemed to just fall in love because they were both there. That said, the writing was flawless and everything flowed. The characters were people of their times and I never felt like anything pulled me out of the novel. Spiritually, I liked that many people in the book sought God’s direction for their life and there seemed to be this overall theme of trust. The novel was well-written, but it just wasn’t my cup of tea.

**I recieved this copy from BethanyHouse. My opinion was not affected in any way.**