1. Mr. Carr, what inspired you to write A Cast of Stones? I was reading my Bible and came across a verse that said “God is in the lot.” I started to wonder about that and my imagination kind of ran wild. What would it be like to have a world or church based on the ability of certain people to cast and read lots. That’s when the thought occurred to me that it would look similar to the medieval church before the Reformation, sort of mechanistic in its approach. After that, I tried to create interesting characters.

2. When writing a fantasy-like novel, what are some roadblocks that you come up against, if any? The biggest roadblock is staying consistent within the world you’ve created. The temptation is there to make up new rules as you go along whenever you get to a tricky point in the story. Readers are pretty unforgiving of that approach, but it does happen quite a bit. You can see hints of it even in the very best selling fantasy series. I had the luxury of being able to make minor edits to the first book even while I was working on the last one. That helped make the story very consistent throughout.

3. Errol is such a well rounded character, did anything (anyone) influence his creation? I’m like any other writer, I pull my characters from real life and Errol is an amalgam of a lot of people. But in addition to that, he represents the kind of person I’d like to be. Physically, he looks like my oldest son. I use my family’s likenesses quite often when I’m writing.

4. As far as secondary characters go, one minute Cruk was my favorite, then Martin, then Luis, and Liam’s role as a foil to Errol was almost comical. Did you have a favorite secondary character? I’d have to say Rokha. She’s a lot like my wife in some ways, strong, but very caring. Mary is a nurse now, but when I met her she was her school’s crew team and had all the muscles you’d expect on a warrior woman. Rokha acts as the caravan’s impromptu medic which is another similarity.

5. Can you tell us anything about The Hero’s Lot? It’s the second book in the “Staff and the Sword” trilogy. The middle books are sometimes a little slower in their pacing as the author gets ready for the big finish, but everyone who’s read “The Hero’s Lot” so far has told me it’s even better than the first. I will say that Errol discovers the truth of his parentage. It’s not what the reader would expect. 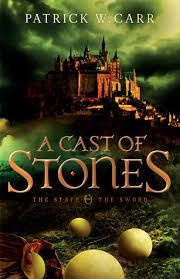 You can check out my review here:https://remaininhislove.com/2013/01/02/patrick-w-carrs-a-cast-of-stones/