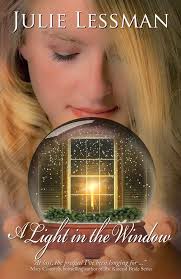 One Woman. Two Men.
One stirs her pulse and the other her faith.
But who will win her heart?

Marceline Murphy is a gentle beauty with a well-founded aversion to rogues. But when two of Boston’s most notorious pursue her, she encounters a tug-of-war of the heart she isn’t expecting. Sam O’Rourke is the childhood hero she’s pined for, the brother of her best friend and a member of the large, boisterous family to which she longs to be a part. So when his best friend Patrick O’Connor joins in pursuit of her affections, the choice seems all too clear. Sam is from a family of faith and Patrick is not, two rogues whose wild ways clash head-on with Marcy’s—both in her faith and in her heart.

While overseeing the Christmas play fundraiser for the St. Mary’s parish soup kitchen—A Light in the Window—Marcy not only wrestles with her attraction to both men, but with her concern for their spiritual welfare. The play is based on the Irish custom of placing a candle in the window on Christmas Eve to welcome the Holy Family, and for Marcy, its message becomes deeply personal. Her grandmother Mima cautions her to guard her heart for the type of man who will respond to the “light in the window,” meaning the message of Christ in her heart. But when disaster strikes during the play, Marcy is destined to discover the truth of the play’s message first-hand when it becomes clear that although two men have professed their undying love, only one has truly responded to “the light in the window.”

Review
Oh I know! This one is my favorite! Ms. Lessman gets better and better with each novel she pens, so I think its fairly obvious I have enjoyed the O’Connor series. When I first ordered this book, I figured I knew what was gonna happen thanks to some hints in the previous novels. I was wrong. I was fairly surprised as I turned the pages of this book. And for those of you who are not fans of having two men and one girl, this novel doesn’t follow that same pattern. I never felt like I was having a hard time choosing which guy I prefered or that Marcy was playing the field. I’ve always liked Patrick, but I really liked how the younger Patrick saw Marcy and changed. And in those times he wasn’t sure he would have Marcy, he still continued to change for the better. Watching his faith develop and grow in God was a beautiful aspect of the novel. And Marcy was a terrific heroine. I always complain about the annoying ones, but she isn’t annoying, every decision she makes, makes sense to me. Also, I really liked the emphasis on friendship. I’m not married, but I imagine that’s quite important when choosing your spouse. Spiritually, I love the emphasis on the power of prayer and how a real relationship with Christ will change you. The only two drawbacks? I wanted to see Sam’s reaction in the end, and this is the last O’Connor book. Sad to see the series end! Highly Recommended!

One thought on “Julie Lessman’s A Light in the Window”