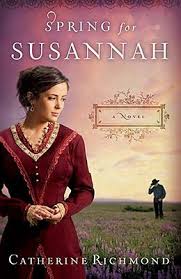 Hundreds of miles from home, Susannah faces an uncertain future as a mail-order bride on the untamed Dakota prairie.

When her parents die suddenly, and no suitors call, Susannah resigns herself to the only option available: becoming a mail-order bride. Agreeing to marry her pastor’s brother, Jesse, Susannah leaves the only home she’s ever known for the untamed frontier of the Dakota Territory.

Her new husband is more loving and patient with her than she believes she deserves. Still, there is also a wildness to him that mirrors the wilderness surrounding them. And Susannah finds herself constantly on edge. But Jesse’s confidence in her—and his faith in God’s perfect plan—slowly begin to chip away at the wall she hides behind.

When she miscarries in the brutal Dakota winter, Susannah’s fledgling faith in herself and in God begins to crumble. Still, Jesse’s love is unwavering. Just when it seems like winter will never end, Susannah finally sees the first tentative evidence of spring. And with it, the realization that more than the landscape has changed.

She looks to the future with a renewed heart. Yet in her wildest dreams, she couldn’t predict all that awaits

Review
I loved this book! I loved that though it was a marriage by proxy (who has ever heard of those?) the author didn’t have them meet and then decide to be friends first or something equally odd. They got married first and then learned to be friends and that in my opinion, made this novel so original. Jesse, was such a unique hero because he was a constant talker while Susannah was the quite one. You can’t help but really love Jesse in this novel. The only drawback is that once Jesse leaves for a job, the novel kind of misses him too. Spiritually, Susannah comes to know and trust God on her own and Jesse has to learn that God’s plan isn’t often our own. I really enjoyed this novel. Highly Recommended!