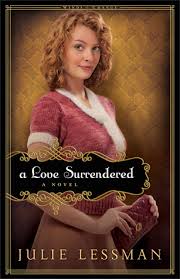 About
Orphaned in Iowa, Annie Kennedy moves to Boston to stay with her spinster aunt. She longs for romance to fill the void left by her parents’ death. But when she falls hard for Steven O’Connor, the man who broke an engagement to her sister, Annie is worried. Will he break her heart too when he discovers who she really is?

With heart-pounding romance, intense family drama, and emotional twists and turns, A Love Surrendered is everything Julie Lessman’s many fans have been waiting for.

A Julie Lessman novel=drama. And this latest tale is no different. This is the last novel in the O’Connor series (at least for a while, if you don’t count the prequel coming out in November) and I thought it was a very good conclusion. It may even be one of my favorites in the series. You have Annie who is a small town girl come to the big city with a big secret and you have Steven who struggles with guilt even as he plays with fire. I think I liked Steven’s character the most because of all the men in the O’Connor family, there were a couple of scenes in the novel that just made him stand out. Although, there were times when I was like really Steven? You can’t read about one O’Connor without reading about the others and so you get some updated info on several siblings’ marriages. Spiritually, Annie gets a swift reminder to trust God and I love how much she falls in love with God and is willing to put him first in everything. This is what makes her character unique. Steven has to learn to forgive himself and to give his life to God. Good Book. You must read this series in order to make sense. Highly Recommended!