Well, thank you for asking me!!!

1. When writing YA fiction, are there certain things that you feel must be in a novel or shouldn’t be in a novel?
Great question! I actually just wrote a guest post for Go Teen Writers and that’s the very thing I discussed! Any great YA novel should have three elements.
A. An unforgettable character
B. An impossible situation
C. A relentless threat
If you have these three things, you’re on your way to writing a fabulous YA!

2. Halflings involves a number of spiritual beings. When writing Halflings, did you have to do any kind of research?
All the research came along years before I ever started the book. I’ve always been interested in angels … not to the point that I searched out websites or anything, but there are a lot of angel/human interactions in the Bible. I always paid close attention to how and why the angels acted the way they did. Then I took it and started spinning fiction into it. Quite fun, actually. 

3. What was your inspiration for this series?
A bunch of teenagers who started talking in my head and wouldn’t shut up until I told their story. When I started writing Halflings, I’d been working on a completely different style of book. You might say the story idea took me captive. So far, it hasn’t let go. Apparently, I have my own relentless threat at work.

4. As it stands, Nikki is not supposed to end up with either Mace or Raven, but I have great faith that something, somehow, someway will change that. Do you already know who she will end up with or will you be surprised as well?
I’ve always known who, but honestly when I’m writing her with the other character, I totally change my mind. I even told my husband, “When she’s with ——-, I really believe that’s her match, her soul mate. She should end up with him!” Even though I know differently. My husband told me that if I’m not convinced, the reader won’t be convinced. Every time she’s with one or the other, we should be wondering about who is right for her. We find out in Guardian if she actually can have one or the other.  Yes, there’s a BIG reveal in that book.

5. Please tell us something (anything!) about the upcoming Guardian.
Well, I can say this, it’s the funnest book I’ve ever written. Nikki has to dig deep to fulfill her destiny. She gets to take a trip to Europe with the Halflings, discovers her “girly” side when Winter, Vegan and Glimmer “adopt” her, and she struggles with fitting into a world of gorgeous half-angel beings making her wonder if she should return home. A painful realization opens old wounds and she finds herself hunting the very man who swore he’d protect her.
Guardian releases on October 9. But you can read the first two chapters free in the ebook short story A Halflings Rescue. It’s available at all e-retailers. It’s a fun short story and my awesome publisher included the first two chapters of Guardian with it.

Check out my review of Halfings:https://remaininhislove.com/2012/08/27/heather-burchs-halflings/ 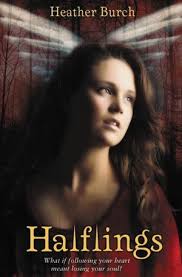