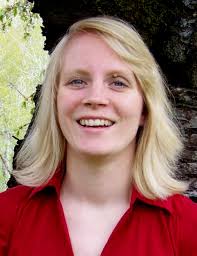 What inspired you to write the Blood of Kings Trilogy?

My son and I were walking along the streets of Burbank and we saw a burned-down house. There was a tree in the yard that had partially burned. It was half charred and half leafy green. I thought it was the coolest image. I ran home and Photoshopped it. It’s the same image that’s the header on my blog. I knew I wanted to write a story about this tree.

So what comes first, the story or the land of Er’Rets?

I had a vague idea for a story, but I drew the map before I ever started to write. Drawing a map of my storyworld really helps me learn about the place. I can’t not draw a map these days. I love maps. *grin*

One thing I appreciated about this series is the different layers of stories that are interwoven throughout the books. Did you plot these out ahead of time, or were you surprised as they developed?

Both, I think. Part of that came from the time I took planning my storyworld. Because I had so many cities and because I had planned out the lords and ladies in each, I had inadvertently planted the potential for future layers. So when my characters would arrive in a new location, I’d look it up in my book, discover who the people were, and be surprised by the potential storylines I could choose from.

When writing a fantasy novel, what are some roadblocks you come up against? If any?

I would have to stop when I suddenly had to write something I didn’t know about. Like Vrell needing to patch up an arrow wound. So then I had to go research until I knew enough to write the scene. Another major roadblock was not having written all three books before the first was in print. That really made it hard in book three as I developed bloodvoicing and other things. I was stuck by the story in book one. But if I had written all three in advance, I could have altered book one so that everything worked out how I know wish it had!

Which book in the series was the easiest to write? Which one was the hardest?

The first one was the easiest because there was no pressure. There was no contract. I was just having a good time. Book three was the hardest because by then I had fans that I didn’t want to disappoint and I had I had a lot of plot threads to tie up.

Achan is such a likable character, what (or who) influenced his development?

I have no idea. I just wrote that first scene in the barn where Achan stuck up for the kid, and Achan was born. It’s nice when your characters do that.

Averella seems to be the perfect foil for Achan, what led to your creation of her?

Originally, Averella was going to be a soldier who shared the bloodvoicing ability, found this strange young man—who had amnesia—while on a mission, recognized the gift in him, and went on an adventure to figure out who, if anybody, he was. But that was back when the book was going to be a science fiction story. And somewhere along the way I switched to fantasy, so Averella as a soldier didn’t work as well, so she became a noblewoman in hiding.

Do you foresee any more books that take place in Er’Rets?

Perhaps. I have a few ideas. I’d like to publish some short stories based on other characters in the series: Sir Rigil, Lady Tara, Peripaso, etc. And I have a fun idea for a prequel of when Er’Rets was discovered. I created such a vast land, there is still so much to use! But I have nothing written yet, and therefore, nothing official to announce.

Can you tell us about any new projects you’re working on?

I am working on two new projects right now. The first is a series about a boy who joins a spy organization that fights for God. The New Recruit comes out September 2012 and is the first of four books. And Captives is a dystopian novel based on Daniel chapter one, which comes out in February 2013. It is the first in a trilogy. After writing all those books, I’m going to write more fantasy for certain!

Thank you for stopping by!

Here is my review of the Blood of the Kings Trilogy: https://remaininhislove.com/2012/05/24/jill-williamsons-blood-of-kings-trilogy-7/