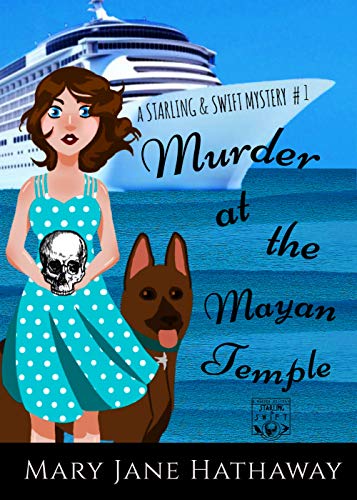 Kitty Swift travels around the sunny Yucatan peninsula assisting luxury cruise ship groups as an interpreter for the deaf. After a disastrous broken engagement, she’s perfectly content to spend her days with her service dog, Chica, and a motley crew of wealthy vacationers. Her life revolves around playing Bingo, enjoying the chocolate fountain, and passing along the occasional complaint about the quality of the bed sheets. On a cruise ship the food is good, the music is lively, and everyone is friendly.

Life is quiet, just as it should be… until murder arrives in the night.

At the top of a Mayan pyramid in the humid jungle, one of her tour group is found sacrificed to the gods. A clue left at the scene makes it clear this is a deeply personal act of revenge― and the killer may have another victim in his sights.

As the entire tour group is brought in for questioning, Kitty and Chica find themselves in a race against time. A hurricane is bearing down on the city, the cruise ship is set to depart, and they’re sequestered in an embassy house with a vicious murderer.

The only person standing in her way is an enigmatic attaché to the American embassy who doesn’t take kindly to all her questions― especially about himself.

Should Kitty be on guard against the mysterious detective, or are they birds of a feather in search of a killer?

I’ve enjoyed several of Mary Jane Hathaway’s novels before so I decided to pick up the first book in her Starling and Swift series. My thoughts:

Diversity. I love that the main character works as an interpreter for the deaf. In fact, most of the characters in this book are deaf. Without being told, you learn a lot about the purpose and value of service dogs, the deaf community, and different causes that lead to deafness. It was just very nice to be introduced to a different world for a different group of people. It also adds an interesting twist to a mystery novel.

Mystery. The book is advertised as a cozy mystery and it is exactly that. The mystery isn’t complicated, it’s not over the top. It’s a basic who-done-it and there’s a lot of fun trying to solve it.

Kitty Swift and Chica. I will say, that I am not an animal person (sad, but true) and I was not initially interested in a book that had a dog on the cover (I know, I know). I figured if the dog is on the cover, it’s going to have a main role and while the dog did have a main role, it totally worked for the narrative that was being told. So, if you’re like me, never fear, the dog has a purpose here. Also, I really liked Kitty Swift. She’s kind and giving, and yet she has a past and secrets that I think will be slowly unraveled over time.

Romance. This is one of those series (and I haven’t finished it) that appears to introduce the couple in the first book and take them slowly through the rest of the series. So, the best kind of romance because it’s one based on friendship and shared interests.

The mystery. Honestly, the only thing that made me roll my eyes was how the bad guy/gal was revealed. They straight up confessed in spite of the fact that Kitty really didn’t have any evidence. It made the novel feel a bit less serious.