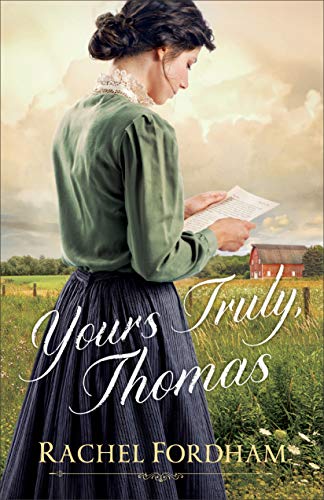 For three years, Penny Ercanbeck has been opening other people’s mail. Dead ends are a reality for clerks at the Dead Letter Office. Still she dreams of something more–a bit of intrigue, a taste of romance, or at least a touch less loneliness. When a letter from a brokenhearted man to his one true love falls into her hands, Penny seizes this chance to do something heroic. It becomes her mission to place this lost letter into the hands of its intended recipient.

Thomas left his former life with no intention of ending up in Azure Springs, Iowa. He certainly didn’t expect a happy ending after what he had done. All he wanted to do was run and never look back. In a moment of desperation, he began to write, never really expecting a reply.

When Penny’s undertaking leads her to the intriguing man who touched her soul with his words, everything grows more complicated. She wants to find the rightful owner of the letter and yet she finds herself caring–perhaps too much–for the one who wrote it.

I really enjoyed Rachel Fordham’s debut book. She really brings a fresh voice to the small-town romance genre. My thoughts:

It was different. I have to give Fordham credit for doing something unique. This novel is part epistolary, part mystery, part western. It’s a lot going on without feeling like a lot is going on.

Romance. Fordham actually presents more than one romance to show that romantic love can come in many different ways and forms…even with Penny. Penny had one way that she was looking for love, but her romance came to fruition a bit differently than she thought.

Mystery. There is one mystery that’s a bit obvious, but then there was a twist in the book that I didn’t see coming.

Spiritually, the characters pray, deal with grief, and how to attain peace.

This book started slow. I’m not sure why, but it took quite some time before I found myself invested. But, the thing that got me, was that the heroine makes a decision that I think was supposed to be kind of romantic but came off to me as creepy and stalkerish. I had serious second-hand embarrassment that made me put the book down. I know I was supposed to suspend disbelief but I couldn’t.

Lastly, (and this is bit a of a pet peeve), I will never understand what authors are trying to say when they glorify these small towns and vilify big cities. I cannot tell you how many times I was told just how great Azure Springs was and how awful Alexandria, VA/Washington DC was (which is funny because coming from Chicago, those cities seem rather small townish to me).

Overall, if you’re looking for a cute romance, than this is for you. It just wasn’t my cup of tea.