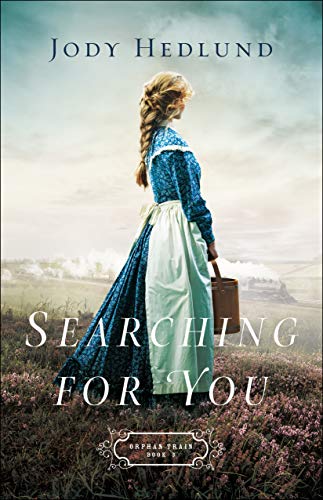 Despite years on the run, Sophie Neumann is determined to care for two young children. She won’t abandon them the way she thinks her older sisters abandoned her. But times are growing desperate, and when she falls in with the wrong crowd and witnesses a crime, she realizes fleeing 1850s New York is her only option.

Disappearing with her two young charges into a group of orphans heading west by train, Sophie hopes to find safety and a happy life. When the train stops in Illinois for the first placement of orphans, Sophie faces the most difficult choice of her life.

Reinhold Weiss has finally purchased his own small farm. With mounting debts, a harvest to bring in, and past scars that haunt him, he’s in no position to give his heart away . . . but can he say no when his long-lost friend shows up on a nearby train pleading for his help?

Jody Hedlund has written some really lovely books, but every now and then, I run into one I’m not a huge fan of. And for me, that was the second book in this series…which is why I delayed reading the last book. My thoughts:

Reinhold. I loved him from the first book. I’ve wanted him to get his happy ending so badly. He’s a very complex hero for a romance novel because he’s not rich and he’s not charming and life rarely ever seems to go his way. And yet, he still manages to wheedle into the reader’s heart. I found him to be a hero that was trustworthy and likeable.

Well-written. The book does manage to pull you in and get you involved with the characters. I found it to be very well-written–from the historical aspect of city life in that time to the well-developed secondary characters. Some of those characters were really fascinating and I found myself wanting to read a book about one in particular.

Spiritually, the novel deals with the concept of grace and how we don’t get what we deserve.

Everything happened too fast. We are told that Sophie’s presence makes things better for Reinhold, but we don’t really get to see that. And while I knew she was physically attracted to Reinhold, I wasn’t sure what she really liked about him as a person. Her sudden love for him seemed like it was based on the fact that they had known each other as children and thus felt safe with him. I was a bit confused.

Also, if you look past the surface, Sophie. First off, the way she deals with the two children in her care confused me. For years, at her own expense, she kept those children close. And then she makes a sudden decision that didn’t jive with her personality at all. I understood why she made her decision. I didn’t understand why she didn’t take more care in making said decision. And then there was her refusal to contact her sisters. It was just beyond selfish to me. Her whole behavior towards them really made no sense. Any of her sisters’ successes or failures were somehow made all about Sophie and so Sophie just came off as strangely selfish, needy, and entitled.

Overall, it was a very quick read. Almost, too quick, but still enjoyable.