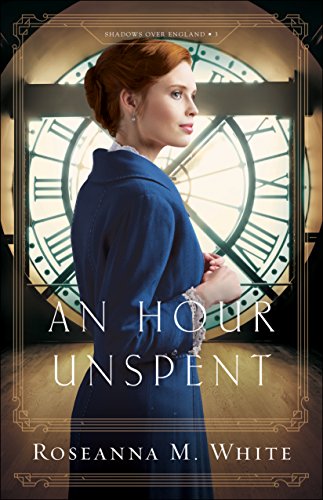 Once London’s top thief, Barclay Pearce has turned his back on his life of crime and now uses his skills for a nation at war. But not until he rescues a clockmaker’s daughter from a mugging does he begin to wonder what his future might hold.

Evelina Manning has constantly fought for independence, but she certainly never meant for it to inspire her fiancé to end the engagement and enlist in the army. When the intriguing man who saved her returns to the Manning residence to study clockwork repair with her father, she can’t help being interested. But she soon learns that nothing with Barclay Pearce is as simple as it seems.

As 1915 England plunges ever deeper into war, the work of an ingenious clockmaker may give England an unbeatable military edge–and Germany realizes it as well. Evelina’s father soon finds his whole family in danger–and it may just take a reformed thief to steal the time they need to escape.

Ms. White is easily one of my favorite authors. She writes well researched novels filled with complex characters who often wrestle with spiritual issues and natural issues. However, as much as I’ve been enjoying this series, this book was my least favorite. My thoughts:

Return of characters. Obviously, if you’ve been following this series, you get the return of the orphan siblings. I was very excited to find out who Barclay was and the kind of woman who would win his heart. Of course there was also the return of Willa and Rosemary and I enjoyed seeing what they were up to.

The setting. I feel like World War I is a war that’s rarely highlighted in fiction. White does a lovely job of showing London in this era and the effects of the war on those at that time.

Clockwork. You learn a lot about clocks and how they work and just how intricate they are. I really appreciated the time and effort that White put into explaining it.

Spiritually, the novel deals with how God is like a clockmaker…very much into the details of our lives. Every part of us is important to Him.

Evelina and Barclay. Okay, to be fair, it’s not that I didn’t like them, it’s that I didn’t understand them. Evelina was the more confusing of the two to me because I didn’t understand why she was the way she was and why I should care. She cares about the rights of women and factory workers but it seemed like just something she did because she was bored, not because their situations actually bothered her. She was a mix of things that didn’t make sense. She loved her father, but often treated him with disrespect. She cared for the poor and downtrodden and then at moments looked down on them. She wanted independence, but was not in anyway striving to get it. In the end I just did not connect with her character.

As for Barclay, he was a real sweetheart…which was part of the problem. I realized that he’s a believer in this book and no longer over a gang, but his personality was so soft that I had a hard time believing he had ever been as criminal as he kept telling me he was. Because let’s face it, it takes a certain, ‘I don’t care about others,’ attitude to live a life of crime. And Barclay cares a lot.

Which leads to the romance. Why did Barclay fall for Evelina and vice versa? They seemed so different from each other and I’m not referring to class. I’m referring to personality and character. Evelina came across as silly compared to everything Barclay had done and was doing. It just didn’t work for me.

** I received a copy from Netygalley. My opinion was not affected in anyway.**