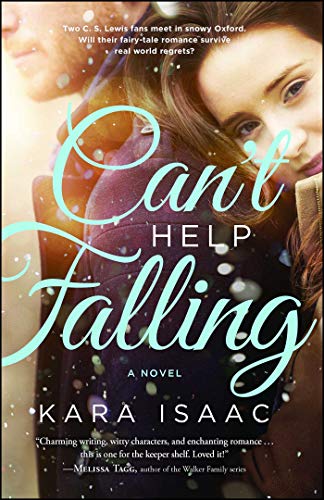 A funny, heartfelt romance about how an antique shop, a wardrobe, and a mysterious tea cup bring two C.S. Lewis fans together in a snowy and picturesque Oxford, England.

Emelia Mason has spent her career finding the dirt on the rich and famous. But deep down past this fearless tabloid-reporter façade, there’s a nerdy Narnia-obsessed girl who still can’t resist climbing into wardrobes to check for the magical land on the other side. When a story she writes produces tragic results, she flees to Oxford, England–home to C.S. Lewis–to try and make amends for the damage she has caused.

Peter Carlisle was on his way to become one of Great Britain’s best rowers–until he injured his shoulder and lost his chance at glory. He’s determined to fight his way back to the top even if it means risking permanent disability to do so. It’s the only way he can find his way past failing the one person who never stopped believing in his Olympic dream.

When Peter and Emelia cross paths on her first night in Oxford, the attraction is instant and they find common ground in their shared love of Narnia. But can the lessons from a fantasyland be enough to hold them together when secrets of the real world threaten to tear them apart? Cobblestone streets, an aristocratic estate, and an antique shop with curious a wardrobe bring the world of Narnia to life in Kara Isaac’s inspiring and romantic story about second chances.

A year or so ago, I read the first chapter of another Kara Isaac book, didn’t care for it too much and tossed it to the side. But then, this one was running a sale and I’m a huge British fan and Narnia lover…and it wasn’t fair to judge an author’s collection by a chapter in one book. Thus, I read this one…and was presently surprised. My thoughts:

The setting. I love that the novel takes place in Oxford. Even though the main characters are out of school, you still get that university feel and setting with the bonus of it being Oxford.

Narnia. I could totally relate to Emelia climbing in wardrobes and looking for Narnia (at first, the obsession was a bit weird later until it was explained). As a kid, I definitely went to sleep praying I would wake up there. There is something about those books that just connects people.

Peter. He was the star of this book for me. I loved everything about him, even when he got angry and said silly things. He was an ultimate sweetheart. Peter struggled with not liking his brother (he’s very unlikable) very much and yet protecting him at every turn. He struggled with loving rowing and yet coming to the possible conclusion that that part of his life might be over. He was the kind of person who shouldered everyone’s burdens and put himself last. It’s hard not to like a hero like that.

Spiritually, the novel doesn’t go into a lot of detail, but Peter’s faith (and his friends) is very important to him. He’s not willing to compromise for anyone. There is also references to knowing that God is everywhere and in everything.

Emelia. And really it’s only because this is a novel based on a secret and it’s a secret she decided needed to be kept. Why? Why? Why? Would that the author had chosen the narrow path and had Emelia confess her sins right away and then she and the other characters could have worked through it. But no. Alas, this book follows the traditional route where secrets are concerned and that meant it was hard to like Emelia when you knew she was keeping things from Peter to save her own skin. She started to come off as flaky and wishy-washy and there were moments I wondered what Peter saw in her. That said, other than this glaring issue, she was a very interesting and moving heroine. I understood where she was coming from, but I did get fed up from time to time.

Even though this book had a huge flaw IMO, the writing was good. The characters were dynamic, the story original. I’ve already picked up my next Kara Isaac book!