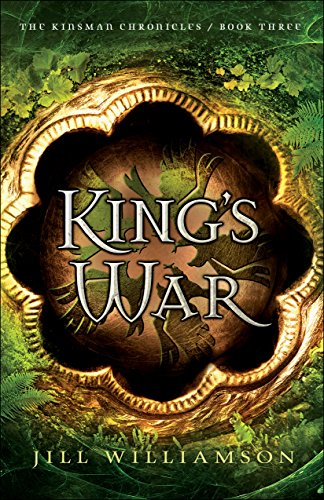 One battle is over, but the war has just begun. They escaped the Five Realms and have found a home, but peace is much harder to find. The aftermath of the Battle of Sarikar should have been a time to mourn those lost in the slaughter. The enemies of Armania are many, however, and when one steps back to regroup, another surges forward in attack.

While the remnant must take responsibility for the evil they brought to Er’Rets, it would seem that something just as dark already existed in this new world. The growing struggle between Armania and Barthel Rogedoth is but a pale reflection of a far more dangerous battle for the souls of humanity.

And so begins this awe-inspiring conclusion to Jill Williamson’s Kinsman Chronicles. The Hadar family and their allies prepare to make one final stand in the name of Arman. There shall be war–in Er’Rets and in the Veil–to vanquish evil or be ruled by darkness.

I love Jill Williamson’s novels. Just love them. I was very excited about this last book in the series, but I’m not going to lie. It took me a minute to get really into it because of all the characters and side stories going on. Unless the character was an absolute favorite, I had kind of forgotten what certain people were doing, their relationships, and what they were involved in. However, once I got pulled in, the book didn’t let go.

I am in awe of the vision that Williamson had as she pulls together all the pieces of the Kinsman Chronicles and the Blood of Kings trilogy. We’ve got King Trevn, who I will be honest and say I knew he would be king (because of the Blood of Kings trilogy) who is learning how to rule a really messed up kingdom. I always liked him in the previous books, but he really shines in this one. You can see how he’s matured from the boy who ran from responsibilities into someone who faces them head on. Then there’s Hinck who grew from Trevn’s shadow to a man in his own right; Oli, Onika, Grayson, Kalanek…the list goes on. There were so many great characters who were allowed to grow and change and make mistakes and still be interesting while doing it. And the great part about all of them was that they felt human. Just because this is characterized as christian fiction, doesn’t mean that Williamson shied away from the realities of life.

Spiritually, I thought the book was on point as an allegory. You really see the difference between magic (i.e. witchcraft) and the power of God. I’m not sure if that was Williamson’s point, but that definitely stood out to me.

There was one character, a female, who I did like in the previous books but who completely became a TSTL character. I was guaranteed that if there was going to be trouble, she was going to be right there in the midst of it. At one point, we, the reader, are supposed to fear for her life and I was thinking if she died there would be no real loss. She just got on my nerves and I’m not sure I loved who she became.

Williamson is building towards a great battle starting with the second book in this series. She absolutely delivers. But it got so long and detailed, I did start skimming.

Overall, a great series! It made me immediately pick up the Blood of Kings series and do a reread. I do think the Blood of Kings was a better series, but mostly because it was focused on two povs throughout the series so you really connected with the characters. I’m not a huge fan of the multiple povs. That said, kudos to the author for doing it and doing it well. I hope Williamson isn’t done writing about this world. I’m not ready to let these people go.