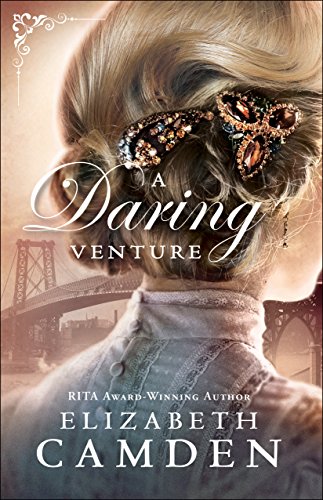 As a biochemist in early 1900s New York, Doctor Rosalind Werner has dedicated her life to the crusade against waterborne diseases. She is at the forefront of a groundbreaking technology that will change the way water is delivered to every household in the city–but only if she can get people to believe in her work.

Newly appointed Commissioner of Water for New York, Nicholas Drake is highly skeptical of Rosalind and her team’s techniques. When a brewing court case throws him into direct confrontation with her, he is surprised by his reaction to the lovely scientist.

While Rosalind and Nick wage a private war against their own attraction, they stand firmly on opposite sides of a battle that will impact far more than just their own lives. As the controversy grows more public and inflammatory and Rosalind becomes the target of an unknown enemy, the odds stacked against these two rivals swiftly grow more insurmountable with every passing day.

Elizabeth Camden is a favorite author of mine and not because I love every book she’s written. It’s because I know when I pick up a book by her, I’m going to get a smart, intelligent, pioneering woman (who is still a woman of her times!) matched with a unique and fascinating hero. In that regard, this book is no different. Plus it’s the sequel to one of my favorite Camden books. My thoughts:

Rosalind.  Some of the time. She’s a typical Camden heroine. She’s smart and gutsy. She cares deeply about others and she has this fascinating past that made me want to learn more about her.

Nick. We were introduced to him in the first book, and I was really excited to learn more. He’s also very smart and kind but also exuberant, outgoing, and yet has a temper. He’s very much a layered hero.

History. You learn so much about drinking water and chlorine. While reading this book, I had to stop and google things to see what had really happened.

The romance. It was kind of strange. I didn’t care for how some of it went down (look below), but even though this book had some definite insta-attraction, I still found myself very curious as to how everything was going to come together.

Spiritually the novel deals with forgiveness…on all kinds of layers.

The secrets. There are just too many and I’m not a fan of how they were revealed. I really don’t like deception in books unless it’s handled well and this felt a bit too formulaic and cliche for me. Because of the secrets, it really made certain characters that I liked, look bad.

Overall, I was a bit disappointed with this book and most likely because I thoroughly enjoyed the first one. However, I won’t ever stop reading Camden. She always manages to provide something fresh and new to the table.