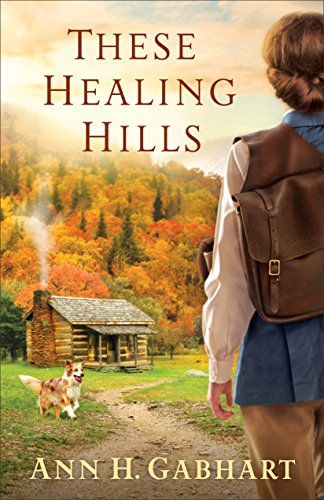 Francine Howard has her life all mapped out until the soldier she planned to marry at WWII’s end writes to tell her he’s in love with a woman in England. Devastated, Francine seeks a fresh start in the Appalachian Mountains, training to be a nurse midwife for the Frontier Nursing Service.

Deeply affected by the horrors he witnessed at war, Ben Locke has never thought further ahead than making it home to Kentucky. His future shrouded in as much mist as his beloved mountains, he’s at a loss when it comes to envisioning what’s next for his life.

When Francine’s and Ben’s paths intersect, it’s immediately clear that they are from different worlds and value different things. But love has a way of healing old wounds . . . and revealing tantalizing new possibilities.

It has been a while but I have read Ann H. Gabhart’s novels before. The reason that I grabbed this one was because: a) she’s a solid writer and b) probably ever since I watched and read Christy as a girl, I’ve always been fascinated by the city girl who goes to work with the people in the mountains and hills of West Virignia/Kentucky. So, basically it was the plot that caught my eye. My thoughts:

Francine. Immediately, almost from the first page, she became a heroine that I could connect with. She’s living in a day and time when most women her age are married and certainly don’t have professions, but there she is, a nurse. Life hasn’t gone exactly the way she has planned and so she has to make new plans…in the mountains. Her kindness and thoughtfulness and even the way she got lost all the time really made her a character that was endearing.

Ben. I liked him right away as well, even though I had a tiny problem with him (see below). He cares about his family and works hard. He is grappling with almost two identities: the boy raised in the mountains and the returned vet who has now seen the world. Which person should he be?

The romance. It was cute and light. I will be honest and say I wished there had been a bit more meat here. But what saves it is that Ben and Francine don’t fall into each others arms right away. They take their time. They get to know each other. They count the cost of being together. It’s not a hate-to-love trope, but there is a lot of hesitance there that I thought worked nicely. In the end, the idea of a romance between a city girl and a country-mountain boy worked.

The secondary characters. I thought the author did a lovely job of teasing out new characters that Francine encountered so that it wasn’t overwhelming. Ben’s family became important to me as a reader and so did other townspeople.

Spiritually, characters pray and seek God’s direction and often meditate on God’s Word for some wisdom.

This is not a bad book. However, I think it could have been even better if there had been more details about Francine’s midwifery and more details about what it was really like up in those hills. Stuff is mentioned, it’s hinted at, but I would have liked to see Francine grapple with it more as a city girl. Although I could tell the author didn’t necessarily want to glamorize the mountain life (because she did present the not so good things), it felt at times glamorized (the people were kinder, more spiritual, giving, etc.).

Ben. Ben is a wonderful hero. The only problem is that he felt so different from his family and neighbors. If I hadn’t been told he was from the area I would never have really guessed. He certainly dealt with his share of mountain problems, but he didn’t feel mountain. I don’t know, maybe that was that point and I’m making a mountain out of a molehill.

Overall, a lovely book. Everything I didn’t like was me being nitpicky. A lot of threads seemed to be rather loose in this book and if the author writes a sequel I will be reading it.

** I received a copy from Revell. My opinion was not affected in anyway.**