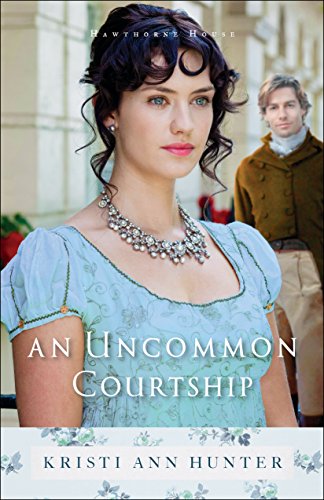 Life for Lady Adelaide Bell was easier if she hid in her older sister’s shadow–which worked until her sister got married. Even with thepressure of her socially ambitious mother, the last thing she expected was a marriage of convenience to save her previously spotless reputation.

Lord Trent Hawthorne couldn’t be happier that he is not the duke in the family. He’s free to manage his small estate and take his time discovering the life he wants to lead, which includes grand plans of wooing and falling in love with the woman of his choice. When he finds himself honor bound to marry a woman he doesn’t know, his dream of a marriage like his parents’ seems lost forever.

Already starting their marriage on shaky ground, can Adelaide and Trent’s relationship survive the pressures of London society?

This is the first book I have read by Kristi Ann Hunter. For some reason the third book in the series appealed to me more than the others….At any rate, this won’t be the last book I read by this author. My thoughts:

In medias res. This book starts right in the middle of things and I loved it. I was immediately drawn in from the first page. A forced marriage? Yes.

Romance. This is a book about what love looks like and quite frankly, how to choose to love someone. I really enjoyed watching Adelaide and Trent fall for each other. It’s not easy and it’s not smooth, but it felt real. I mean, Adelaide and Trent deal with some legitimate marriage issues, but I liked that the author showed how they worked it out instead of glossing it over. I like romances that are built on more than attraction and this is definitely that book.

Spiritually, the characters seek God for guidance and wisdom.

I think for some people this book could be considered slow. There was not a whole of flash/bang.

As a Regency purist, I felt like their were a few actions that the characters took that happened that didn’t quite jive with that era. Also, I was a bit confused about the titles of several characters.

Overall, I could not put this book down and I eagerly look forward to book 3.