Today I am welcoming Ms. Amy K. Sorrells. You can check out my review here: https://remaininhislove.com/2014/02/26/amy-k-sorrells-how-sweet-the-sound/

Thank you for being willing to be interviewed! Thank YOU, Embassie!!!

1.       I know the story of Tamar and Amnon (in the Bible) influenced How Sweet the Sound, but still what gave you the idea to make a more contemporary version of the story?

Every time I read the story of Tamar in II Samuel 13, I became more and more frustrated with the ending, especially II Samuel 13:20: “And Absalom her brother said to her, Has your brother Amnon been with you? Be quiet now, my sister. He is your brother; take not this matter to heart. So Tamar dwelt in her brother Absalom’s house, a desolate woman.” God promises us in so many Psalms and through the words of Jesus and the apostles that He does not want us to live in desolation and silence with our shame and brokenness. He wants us to live free. I wanted to tell “the rest of Tamar’s story,” had she had the chance to seek and find redemption. By setting the story in more modern times, my hope is that readers will find it more relatable.

2.       How Sweet the Sound is not exactly a historical novel, but neither is it “contemporary.” Did you have to do any research for it?

I have reams of research I did for this story, yes! In fact, research is probably my favorite part of writing novels. First of all, I knew nothing about pecans or pecan farming, except that I have always been enamored with the pecan farms we drive past when we vacation along the Alabama gulf coast. So I studied pecan books and farming blogs, watched tons of YouTube videos on pecan farming and cultivating and harvesting, and even befriended a family of pecan farmers in Southwest Alabama. They were graceful enough to read and early version and endorse it for me. But pecans weren’t the only thing I researched. I had to make sure I had the right makes and models of cars that would be around in 1979; who was on the cover of magazines for scenes at the beauty shop; songs that were popular during that era; clothing; cotillion rules; square dance moves and songs; the oceanic biology of a jubilee; area tornado events and patterns; Hurricaine Frederic details (including phone interviews with area residents), plants and birds and fossils common to the area, and more. I had about five times as many pages of research as I did story by the time it was all said and done.

3.       Which character for you was the hardest to write? Comfort? Or Anniston?

Actually, neither. The toughest character for me to write about was Princella. Initially, she was very “flat,” without any redeeming qualities. My editor told me I had to find a way to make her more relatable, and even find redemption in her storyline. I was very angry with her in the early drafts of the novel, and I had to pray a lot and ask the Lord to help me see how she could possibly have softer edges. In the end, the way she turns out and things we learned about her proved to be things I needed to learn about folks too—that hurt people hurt people, and that they need forgiveness, too.

If you had asked me a few weeks ago, I would have immediately said no, and at this point, I still do not have plans for a sequel. However, the more people ask me this, the more I’m imagining places and stories I could create for the two of them. They are pretty adorable, aren’t they?

I’m currently in the middle of edits for my second novel, due to publish in spring, 2015, which features a 94-year-old man near the end of his life who escaped the Jewish pogroms of turn-of-the-century Ukraine, and whose daughter learns for the first time about what he suffered, even as his mind slips further into dementia. Together, they learn how God never leaves His people, and that He truly does see all our wanderings and seals our tears in a bottle. (Psalm 56:8)

An Indianapolis native and graduate of DePauw University, Amy lives with her husband and three sons in central Indiana. A former weekly newspaper columnist, Amy has been a two-time semi-finalist for the ACFW Genesis awards, and was the winner of the 2011 Women of Faith writing contest. 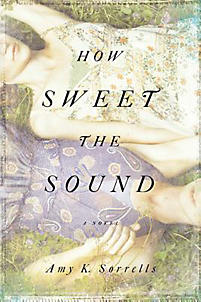 If you are interested in reading this book and have an e-reader the book is FREE through March 9 in e-book format, and here’s the direct link to the publisher with all the e-book retailers offering it for free: http://www.dccebooks.com/products/how-sweet-the-sound