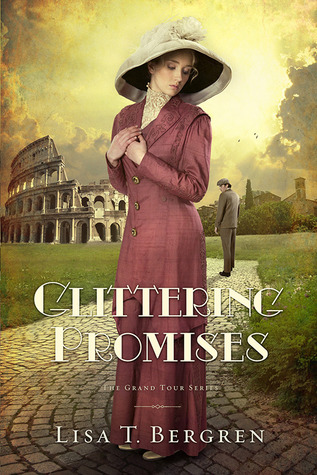 For Cora Kensington, the Grand Tour was to be the trip of a lifetime. She discovered the family she never knew she had, and may have even found the love she longs for in Will. And yet her life has just become infinitely more challenging …
Hounded by journalists chasing the beguiling story of the newest American heiress, Cora fights to remain true to her past, reconcile her present, and still embrace her future. But as Will struggles with her newfound wealth, she begins to wonder if their love is strong enough to withstand all that threatens to pull them apart.
Complicating matters is the stubborn pursuit of Pierre de Richelieu and the increased demands on her time and attention. Cora must stand up for what she believes—regardless of how that might challenge current family and cultural norms—in order to remain true to who she really is.
And as she glimpses the end of the tour, Cora knows it’s time to decide Who and what defines her … and who and what does not.

Glittering Promises concludes Cora’s grand tour. And what a tour it was. I will admit, if I was Cora, I would have wanted it to end a long time ago. The group faced kidnappings, deaths, illness, exhaustion and the list goes on. I felt a bit tired myself and more than a little thrilled when they finally got on the boat for America. To a certain degree the series felt a bit longer than it needed to be. That said, Cora was a wonderful heroine and I enjoyed watching her grow and fall in love.

I found the romance to be realistic even as it dealt with the issues that would surely occur in such a situation. Will was a terrific hero though a tad bit insecure (understandable). However, I will say that he was probably strongest in the earlier novels. The resolution to the kidnappings, however, did manage to surprise me.

Spiritually, I love Cora’s dependence upon the Lord and the fact that she listened to the Lord. You could really see her grow throughout the entire series and I liked who she became.

Overall, the novel was written really well, intriguing, and very much needed to read to bring closure to the series . I am not sure if it was my expectations (I wanted to see Cora back in Montana) that were disappointed or what, but, having read the whole of the series, it perhaps could have been condensed a bit.

**I received this novel from Netgalley. My opinion was not affected in any way.**