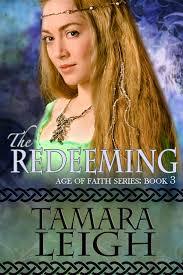 The Unveiling and The Yielding, the first two books in the Age of Faith series, introduced readers to the formidable Wulfrith family during Duke Henry’s battle for England’s throne and his succession. Now that Henry wears the crown, he is more determined than ever to bring the Wulfriths to heel.

IN THE EYES OF THE CHURCH AND MEN, HERS IS NO SMALL SIN

Lady Gaenor Wulfrith is a woman scorned. And King Henry’s pawn. After three broken betrothals, she is ordered to wed her family’s enemy, a man she has never met and has good reason to fear. Faced with the prospect of an abusive marriage that will surely turn worse when her sin is revealed, she flees her family’s home with the aid of a knight—a man who could prove her ruin.

Christian Lavonne, the only remaining heir to the barony of Abingdale, has thrown off his monk’s robes—and God—to minister his lands. Determined to end the devastation wrought by his family’s feud with the Wulfriths, he agrees to marry his enemy’s sister, a woman no man seems to want. When he learns she has fled with a knight who has broken fealty with the Wulfriths, he pursues her, knowing that when they meet his own sin will be revealed and he will be as much in need of redemption as the woman who may carry another man’s child.

When you are in the mood for medieval fiction, Ms. Leigh is the woman to turn to. I was really looking forward to this book after book two in her Age of Faith series and it didn’t disappoint! The best thing about this book was how different Gaenor and Christian are from the other heroes/heroines in the series. Christian is a man who was promised to the church and I loved to watch him deal with the fact that he is now a man who must be willing, at times to fight. Gaenor is different than Annyn and Beatrix because she is a woman with a past (which I imagine wasn’t something that happened that often in those days). I especially liked to see the development of Gaenor and Christian’s relationship in the beginning of the book. It was sweet and different. While I will admit that there were times when Gaenor was a bit annoying, it didn’t last the whole novel and by the end of the novel I really liked her. I will say that though Christian started out as a more original male in this series, he ended very much like the Wulfriths which I thought didn’t particularly need to happen. Speaking of the Wulfriths, they are all in this novel and really a joy to read about. Spiritually, there is the theme of forgiveness and more importantly forgiving yourself. Great novel and looking forward to the next one!