Thank you so much for willing to be interviewed!

1.      What was your inspiration behind Catch a Falling Star?

I like to write fiction that is based on real life. The catalyst for Catch a Falling Star was a conversation I had with a friend several years ago. She has a fulfilling life—lots of friends, a satisfying career/ministry, is involved with lots of worthwhile things—and yet some of her dreams haven’t come true yet. And she was asking, “How did I end up here? Did I miss something? Did I take a wrong turn?” And that conversation stuck with me for weeks. Everyone experiences life not going according to plans—the question is: What do you do when life takes a detour?

2.      When you write, do you plot the story out beforehand or are you surprised as to where it takes you?

Yes and yes.  I use The Book Buddy to plot out my novels. The Book Buddy is a marvelous work-text created by best-selling author Susan May Warren that helps you map out your novel. I then fast-draft my novel—and that’s when the surprises happen. I know where I’m going, but there’s always an unexpected plot twist or two. I start writing a scene and end up thinking, “I didn’t know that was going to happen!” Plotting is needed—but I have to give the story room to breathe and lead me a little bit too.

3.      I found Griffin to be such a fascinating character. Was there anyone/anything you based him off of?

Oh, Griffin. Such a fun hero. My husband was in the air force and we made several good friends who were pilots – some helicopter pilots and some jet pilots. Getting to know them, I discovered that pilots can balance the demands of that career field and their faith. But other than that, Griffin was created in my own head. I think anyone who has been single for a long time gets rather set in their ways—and that was true for Griffin (and Kendall, my heroine).

4.      Your novel deals with a lot of medicine (Kendall is a doctor) as well as issues with adoption. How much research did you have to do?

I had to do a fair amount of research for the medical aspects of the book, especially since I created an imaginary herbal supplement. Even made up, it had to be based in plausible reality. Thankfully, my husband is a physician, so he’s my very-close-at-hand expert. The adoption subplot came about because one of my closest friends has adopted two children. I’ve watched her pray over her children, face the challenges, embrace the ministry God has given her. I wanted to address at least some of that in Catch a Falling Star. She read the entire manuscript, but I especially wanted her feedback on Evie’s story.

5.      Can you tell us a little about what you are currently working on?

I’m finishing up book #3, which is titled Somebody Like You. It’s also a contemporary romance, and it has twins in it. That’s been fun to write because I have a twin sister. I’m also working on a novella and, like any novelist, I’m already thinking, “What next?”

Author Bio:  Beth K. Vogt believes God’s best is often behind the doors marked “Never.” After being a nonfiction writer and editor who said she’d never write fiction, Beth’s debut novel, Wish You Were Here, released in May 2012. Catch a Falling Star releases May 2013. Connect with Beth atbethvogt.com, where she talks with others about quotes through her “In Others’ Words” blog.

Beth Vogt has generously decided to do a giveaway of Catch a Falling Star! All you need to be entered into the running is to leave a comment. The giveaway ends May 24th. Please include your email address. If you are the winner, you have 48 hours to respond to the email that will be sent to you. To start the conversation going: Are there any dreams of yours that you’re still waiting to come true? 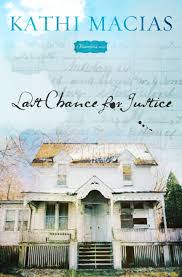 Welcome to Bloomfield, where life is simple, love is real, and stories are shared.

Lynn Myers is still reeling from losing her husband of thirty-five years when word comes that her only sibling, an older brother, has also died. With no one else to settle the estate, she must return to her small hometown of Bloomfield, however briefly, to settle his affairs.
Lynn’s daughter, Rachel, has just graduated from Bible college and with no other commitments comes along to sort through her uncle’s huge old home, right next to the local cemetery.
It isn’t long before Rachel has two men — a handsome CPA and the youth pastor — seriously vying for her attention. At the same time, Lynn’s attention is drawn to a set of journals her brother has left behind detailing a long-standing Bloomfield mystery.
As they pursue solving this mystery, Rachel must make some personal decisions about her future, while Lynn is forced to face unexpected issues from her own past.

This was the first time I had ever read a book by Ms. Macias and I found that I was in for a treat! I found her writing to be engaging and page-turning. Not to mention, I loved the way the mystery around Last Chance slowly unraveled though I will say, when I found out all the facts it was a bit anti-climatic. Lynn and Rachel came across as two very realistic women. I didn’t find any fault with their characters and enjoyed reading from both of their points of views (though Lynn’s reaction to Bloomfield seemed a bit unusual). The romance in the story was a bit more obvious that I would have liked, but I appreciated the hero and found him to be endearing. Spiritually, I loved how Rachel and Lynn both practiced praying before they made a decision and how God was always part of everything they did. The novel wasn’t intense, but it was fascinating and I wouldn’t mind picking up another novel by this author and reading it.

**I received this novel from Netgalley. My opinion was not influenced in anyway.**

Can you believe it? It’s been one year! I hope you have had as much fun as I have! And don’t forget we have a giveaway by Becky Wade still running and one coming up with Beth Vogt so cash in on all the fun! 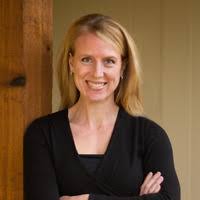 *Disclaimer: This interview is posted on Becky Wade’s website. She has given permission for it to be posted here. And frankly, the questions were so much like I would have asked, I thought they were great for today.

1.What inspired you to write Undeniably Yours?

I was inspired by Regency-era love stories I read growing up that featured wealthy and aristocratic heroines paired with brave-hearted, common-born heroes.  I write contemporary romance and so it was great fun for me to bring these character types into a modern Texas setting and give their storyline my own unique twist.

2.What is the book’s theme?

Undeniably Yours is about a woman’s journey from weakness to strength.  She’s able to find that strength, little by little, as she trusts in God’s power and plan.

3.How would you describe your writer’s voice?

My voice is funny, authentic, and modern.  I write love stories about imperfect people redeemed by a perfect God.  It’s my hope that my books will charm and entertain my readers, while simultaneously stirring their emotions and encouraging their faith.

4.Is Undeniably Yours part of a series?

All of my books stand alone.  They each tell a complete story in and of themselves.  At the same time, I’ve long wanted to write a group of books about members of the same family, and starting withUndeniably Yours, I’ll have that chance!  Undeniably Yours is the first of four books about the Porter family from Holley, Texas.  Each book will detail the story of a different sibling.

5.What was your reaction when your CBA debut novel, My Stubborn Heart, was recently named a finalist for the RITA award?

Joy!  I was so conscious, when I received the news, that God is the one worthy of recognition for the creation of My Stubborn Heart.  I believe that it’s not me who writes, so much as it’s me who steps out of the way and seeks to let God write books through me.

The nomination also filled me with gratitude for the people responsible for bringing the book to publication.  My agent believed in it from the beginning.  My editor, Sarah Long, championed and improved the manuscript.  Everyone at Bethany House — from the editorial staff, to the cover designer, to the marketing and sales teams — lent it amazing support. 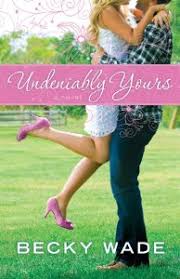 Becky Wade has graciously offered to give away a copy of Undeniably Yours two weeks from today on May 17th! All you need to do to win is leave a comment and a winner will be randomly selected. I ask that you please include your email address. So, to get conversation started what is one thing you like about a Becky Wade novel or what is the first thing you would do if you found out you inherited millions?

When Meg Cole’s father dies unexpectedly, she becomes the majority shareholder of his oil company and the single inheritor of his fortune. Though Meg is soft-spoken and tenderhearted–more interested in art than in oil–she’s forced to return home to Texas and to Whispering Creek Ranch to take up the reins of her father’s empire.

The last thing she has the patience or the sanity to deal with? Her father’s thoroughbred racehorse farm. She gives its manager, Bo Porter, six months to close the place down.

Bo’s determined to resent the woman who’s decided to rob him of his dream. But instead of anger, Meg evokes within him a profound desire to protect. The more time he spends with her, the more he longs to overcome every obstacle that separates them–her wealth, his unworthiness, her family’s outrage–and earn the right to love her.

But just when Meg begins to realize that Bo might be the one thing on the ranch worth keeping, their fragile bond is viciously broken by a force from Meg’s past. Can their love–and their belief that God can work through every circumstance–survive?

Oh I was so thrilled to get my hands on this book and it did not disappoint! I’ve said it before, but can I say it again? I love the way Ms. Wade’s heroes love their heroines. I mean its real love that isn’t flaky and doesn’t change with the wind and when it hits them it hits them hard. Bo is no exception. I love the way he anticipates Meg’s needs before she tells him, the way he patiently waits for her, and the way that he doesn’t stop loving her when things get hard. So Bo has my vote! I found Meg to be a real person. She had flaws and issues and yet she turned to God with each of them and you could see her grow and develop throughout the course of the book. I really appreciated her overall generous nature that really shines in this novel. I will say, when I first saw what the book was about, I was like another rancher/cowboy who saves a city girl? But honestly, the characters come to life in such a way, it will be unlike any other novel you have read. Furthermore, I liked the overall theme of forgiveness and not only trusting God, but learning how to trust people again after encountering particularly nasty people. Looking forward to anything Ms. Wade writes next! Highly recommended!

**I received this novel from Netgalley. My opinion was not affected in anyway.**