1.   When you started Short-Straw Bride, did you always know Crockett would get his own story?

At the beginning, I didn’t have much thought to the secondary characters in the novel. But the more I wrote, the more attached I became to all the Archer brothers. By the time Travis and Meredith’s story was complete, I knew I wanted to write Crockett’s story as well. However, my editors had made it clear to me in the past that they preferred I not write series. So I did some begging and some bargaining. I promised to make his story stand alone with new characters and a new setting so it wouldn’t truly be a series, and my editor agreed. Then, when Short-Straw hit the bestseller list and readers started asking for more Archer brothers’ stories, my editor wrote me and said how thankful she was I had pursued that book with Crockett. I couldn’t have been happier.

2.      What was your inspiration behind Stealing the Preacher?

As I mentioned earlier, the inspiration for Stealing the Preacher sparked during the writing of Short-Straw Bride. Crockett Archer played a key role in the story, his smooth, teasing charm a balance to older brother Travis’s gruff, over-protective nature. I knew in my heart that this man deserved a story of his own.

When the Archer brothers were children, growing up alone on their ranch and defending it from those who wanted to take advantage of their youth, Crockett’s niche in the family evolved into that of spiritual mentor and healer. He was in charge of the family devotionals the Archers conducted in lieu of attending a church service, and whenever an injury occurred on the ranch, Crockett was the one to tend it. For years, the Archers never left their land, yet as he grew to manhood, Crockett felt God’s call deepen within him—a call to not only minister to his brothers, but to a congregation of his own.

So what kind of heroine could I create for this noble preacher-to-be? Well, she had to be someone who shared his values and his calling to ministry. But if I left it at that, we’d have an awfully dull story. So to liven things up, I made Joanna Robbins the daughter of a retired outlaw, one who despises “sermonizers” and their hypocritical ways.

Since Crockett is no ordinary preacher, but a gun-toting rancher with a gift for doctoring . . . well, that meant a plot full of scrapes, trouble, and shenanigans. But amid the adventure and romance lies a heartrending tale of God’s pursuit of a single lost soul.

3.      What is the one thing every romance novel should have?

By definition, a romance novel needs to have a sigh-inducing love story at its core which includes a happily-ever-after for the hero and heroine. Of course, I also enjoy a lot of action/adventure, humor, and poignant, dramatic moments along the way.

4.      You have written a number of books now, do you have a favorite hero or heroine? Or one that stayed with you the longest?

People often ask me this, and my answer is always: Asking an author to pick a favorite book of hers is like asking a mother to pick her favorite child. It’s just impossible. However, I know that’s a bit of a cop out, so if pressed I will admit that my favorite hero is probably Levi from To Win Her Heart. From overcoming his violent past, to the extreme efforts he made to hide his speech impediment, to the gentle way he challenged Eden to move from surface Christianity to soul-deep faith – he would get my vote for favorite hero.

5.      Can you tell us something about what you’re working on now?

My next project is actually a novella that features Neill Archer, the final brother in the Archer clan. I just couldn’t let him go without giving him his own happily ever after. Away from the Archer ranch for two years to earn the money needed to start up his own spread with his childhood friend, Josiah, Neill takes a job repairing a little old widow’s roof. Only the widow isn’t old nor is she little. She’s nine months pregnant with her deceased husband’s child, and she meets Neill with a shotgun aimed at his chest.

Neill’s story, A Cowboy Unmatched, will be part of a collection entitled A Match Made in Texas. It releases January 2014 and includes novellas by three other wonderful historical authors: Mary Connealy, Regina Jennings, and Carol Cox. 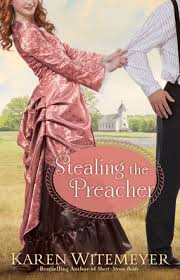 3 thoughts on “Interview of Karen Witemeyer”